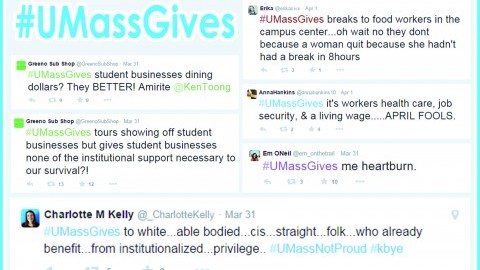 The University of Massachusetts is preparing to launch its fundraising campaign, UMassGives, beginning April 29, inviting students, alumni and their families to donate monetary gifts. These funds will go toward an area of campus the contributors would like to support as part of the 36-hour fundraising event, which is driven by social media under the hashtag, #UMassGives.

However, while some see the campaign as an opportunity to give back to the campus community, others are skeptical. On Twitter, people raised concerns about exactly what the campaign was working for compared to what people actually believed were the issues the University should be focusing on.

Most students voiced their worries about their inability to contribute financially due to student debt and high tuition rates. Beth Ramey, who recently graduated from the University, shared her perspective as an alumna.

“I think it is important for alumni to give back to UMass, but I also understand the students inability or reluctance to contribute because of how much debt they have coming out of school” she said.

Erika Civitarese, a junior majoring in social thought and political economy, said that the campaign website does not give enough specifics about the final destination of the donations.

“We don’t know where the money is going,” she said. “Administration needs to focus on the things they put students through, such as meal plan increases and lack of mental health support for people of color, before spending money on something else.”

Nathan Adams, executive director of Annual Giving, believes the negative response that the campaign has received among the student body has to do with a lack of understanding of what the event is.

“UMassGives is supposed to be a vehicle for students, alumni, faculty, staff and friends to talk about which areas are the most important to them and should receive additional funding, and then promoting that to potential donors” he said.

Anna Amrich-Hankins, a sustainable food and farming major, believes there is a lack of financial transparency within the campaign. She also voiced her support for the criticisms that were raised on social media.

“I thought the use of social media by the students was witty, and an important way to bring up many issues that UMass gives or doesn’t give enough to,” Amrich-Hankins said.  “Among those were very serious topics such as rampant white supremacy on campus, inadequate health services and accessibility on campus.”

According to Adams, the critical opinions about the University that students have been publicizing on social media only discourage potential donors from getting involved, preventing areas such as UMass Disability Services from getting additional funding.

The hashtag #UMassGives was meant to draw publicity for the three-day event, but has been used by students to criticize the way the fundraising is being conducted. Especially vocal have been student businesses, who have recently also been fighting for the ability to accept Dining Dollars.

While some students felt the campaign did not address the true issues on campus, others criticized the tactic in which the fundraiser was operated in.

However, Aaron J Cooper, a senior majoring in operations and information management, doesn’t feel like this fundraising tactic would be effective if it was oriented toward smaller efforts, such as clubs or student businesses.

“It is an interesting way to raise money,” Cooper said. “It doesn’t seem to be the most effective of methods to raise money for departments, but it is still young”.

Adams said the money donated to a specific college or organization will be pooled together, and the dean or the organization director will decide where to send those funds internally from there.

Participants can visit the UMass Rising website and select their preferred donation recipient. The administration will also include bonus challenges, rewarding the areas that received the most donors within a one-hour window.

Cecilia Prado can be reached at [email protected] and followed on Twitter @thececiliaprado. Patrick Hoff also contributed to this report.