Take Back the Night event raises awareness about sexual violence 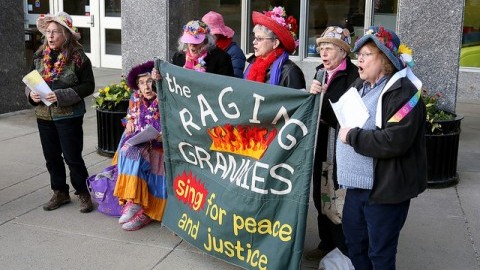 A group of University of Massachusetts students circled in front of the Student Union, gathered together for one cause. The 30 participants marched Thursday at 7 p.m. in the annual Take Back the Night event in order to raise awareness and fight against sexual violence.

Organized by the Center for Women and Community, the march aimed to incite social change and community action.

After a performance by the Raging Grannies, a music group of elderly women who advocate for women’s rights, and personal statements made by group members, posters were distributed and the march began.

Group members enthusiastically chanted as they marched from the Student Union to the W.E.B. Du Bois Library, around Herter Hall to the Fine Arts Center and across North Pleasant Street to the New Africa House. While at the library, they took a break from chanting to march silently through the Learning Commons.

Associate Director of Counseling and Rape Crisis Services at the CWC Becky Lockwood helped organize Take Back the Night when she was a UMass student, and said that the event continues to be mostly student organized. Although Take Back the Night marches have taken place nationally since the 1970s, Lockwood said that the CWC started marching consistently about 10 years ago.

Since then, the event has been held annually in April, which is Sexual Assault Awareness Month.

However, the turnout for the march was particularly low this year. According to Lockwood, the march traditionally attracts about 80 to 100 students. She attributes the low turnout to Thursday’s cold and windy weather, as well as to the fact that the semester ends earlier than it used to. The march coincides with a particularly busy time for students who are preparing for finals.

Although the march used to consist entirely of female participants, it is open to men as well. Of the group of approximately 30, two marchers were men.

“In recognition that men are subject to sexual violence as well, now everyone can participate,” Lockwood said. “No matter what your gender identity, we all have a role to play in the safety of the community. Sexual violence isn’t a women’s issue, it’s everyone’s issue.”

Throughout the years, Lockwood said the message – that “sexual violence is a community issue and we all need to take a stand” – has been consistent. The level of survivor comfort at the event, she added, tends to vary.

“At different times, I feel like (Take Back the Night has) been a place where survivors can share their experiences,” Lockwood said. “But that comes and goes as to whether they feel comfortable speaking out.”

One way group members shared their experiences came during the poster-making event in Campus Center room 163C that was held prior to the march. In addition to the posters, participants were able to craft T-shirts and paint “wounded hearts” – heart-shaped wooden cutouts.

According to Lockwood, the idea originated from an art exhibit in Texas. Survivors of sexual violence paint the hearts “as a way to express the impact of their experience or to help heal.”

Most years, Lockwood said the hearts have been put on display at a UMass gallery or in the windows of local businesses. However, she said no such arrangements have been made for this year’s hearts.

After the march, participants went to watch a performance by the Phallacies, a group from the Center for Men and Masculinity. Through their music and performance, the Phallacies try to debunk stereotypes about men and talk about what their real experiences are like.

Between the musical performances and the march itself, Lockwood said Take Back the Night was both fun and serious. Lockwood emphasized that the event must be part of a bigger strategy in the fight to end sexual violence.

“Take Back the Night is a piece of creating awareness and creating change,” she said. “But there’s a lot of pieces to that puzzle.”