The wolves descend on Rick and Co. in ‘The Walking Dead’s’ best finale to date 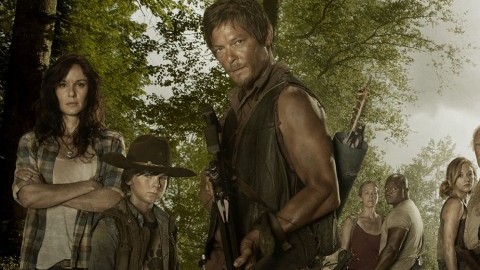 This year on “The Walking Dead” has been defined by tension, excitement and change. That last one is the most integral to the program’s rousing success in its fifth season. Everything changed. Rick (Andrew Lincoln) and company raced between an unprecedented three locations, the survivors got a whiff of civilization at Alexandria and they became the bad guys they always talk about – the ones who lurk outside the walls.

At every point, these changes unfurled slowly, methodically and believably. All subplots, from Sasha’s (Sonequa Martin-Green) unhinging mind to the wandering walkers with W’s carved in their foreheads, came to fruition last Sunday on its fifth season finale, a special 90-minute crockpot of ratcheted suspense. It was by all measures “The Walking Dead’s” best finale and one of its finest hours.

Balancing several parallel narratives never ranked among the writers’ stronger skills. They often fizzle out with little intrigue. Most salient is the relationship between Daryl (Norman Reedus) and Merle (Michael Rooker), a fascinating fraternal bond that toyed with depth before Merle’s premature sendoff in season three. Not so this season. The writers, led by show runner Scott M. Gimple, weaved every thread into a taut climax.

After Rick fails to reinstate the Ricktatorship in “Try,” he prepares for an unofficial trial by Alexandria. The preceding hours reveal rifts within the ranks. Michonne (the phenomenal Danai Gurira) wants to settle into the town, while Rick and Carol (Melissa McBride) gather ammunition for an armed insurrection. This division is among the first moments on “The Walking Dead” that threaten to truly tear apart Rick’s group.

Meanwhile, Glenn (Steven Yeun) trails the cowardly Nicholas (Michael Traynor) over the walls of Alexandria where they hash out their animosity. Daryl and Aaron (Ross Marquand) track a nomad they’d like to welcome into Alexandria. Their mission gets sidetracked when they stumble into a trap set by a sadistic group called the Wolves, the source of the marked walkers. For a moment, I thought fan-favorite Daryl Dixon had finally met his maker.

Then, Morgan Jones (Lennie James) swoops in to save both trapped men. Amid the tension and intrigue of myriad narratives, Morgan’s triumphant return stands paramount. A character that had starred in only two episodes over five years, Morgan lingered in the fandom’s imagination and sparked endless debate over when, if ever, he’d return as a main player.

His return shaped a lucid juxtaposition with the monstrous Rick. Poetically, Gimple places their reunion at Deanna’s (Tovah Feldshuh) crucial blessing for Rick to execute Pete (Corey Brill). Rick, bloodied and savage, stares down Morgan, cleansed and pure, in the most chilling denouement the program has produced.

Albeit a miniscule role to date, Morgan became the perfect benchmark for discerning Rick’s growth or deterioration. Played by the magnificent Lennie James, the man was Rick’s first encounter after the sheriff’s deputy awoke from a coma in the pilot. Morgan already knew some tricks of the trade and became Rick’s tutor. Seen much later in season three’s “Clear,” Morgan’s son had died, and he suffered from vapid mental health. Conversely, Rick stood on the verge of consolidating his prison stronghold.

Now in “Conquer,” Morgan has become a zen warrior, while Rick, who puts down Pete with alacrity, has become a hound with blood on the scent. Noticeably, Morgan stows the Wolves safely in a car after they try to kill him. They wouldn’t have fared so well facing Officer Friendly.

As it was in the pilot and in “Clear,” Rick and Morgan’s relationship promises to astound in the upcoming sixth season. Both Lincoln and James exude anger and pathos with a simple glance at the camera; together, their chemistry is palpable.

In another big change this year, Rick morphed into some twisted version of The Governor, a shadow of the savages he fears. Even Carol became a Trojan horse. Her death threat to a little boy, delivered in a calm, fairy tale voice, petrified me like no walker ever could.

The trial sequence was a perfect climax for this season. All year, it’s felt as if Rick were on trial. The brewing tension between Rick’s group and the Alexandrians threatens to reach a fever pitch when Rick’s fate within the town appears dim. When Rick kills invading walkers, he brings them to the trial and stakes his final point: without him, Alexandria faces inevitable failure. Perhaps in Cliff Note’s fashion, a grieving Deanna not only accepts Rick, but also orders him to kill Pete.

This rapid-fire 180 played out too quickly, but it worked poetically. It completed “The Walking Dead’s” triumphant fifth season in a novel format. With so much tension and animosity, both between Rick and Alexandria and within Rick’s ranks, the death of a major character seemed inexorable. Gimple had other thoughts in mind.

Not one major character heard a death knell during “Conquer.” Whereas other times the survival of the whole pantheon has disappointed (think season three’s flaccid showdown between Woodbury and the prison), the survival of everyone fit the episode’s unexpectedly hopeful tone. Glenn and Nicholas bury the hatchet, Deanna spares Rick, Maggie saves both Sasha and Father Gabriel and Morgan rescues Daryl and Aaron. Every narrative’s culmination emanated hope and retribution.

“Conquer,” along with its acting, the script and Nicotero’s direction, stands among “The Walking Dead’s supreme achievements. It interwove numerous storylines, progressed its characters and set up a thrilling showdown for season six. “Conquer” was everything a finale should be.

And if foreshadowing holds any stake in the season to come, the group will need this newfound cohesion. As the post-credits car window warns, the wolves aren’t far.