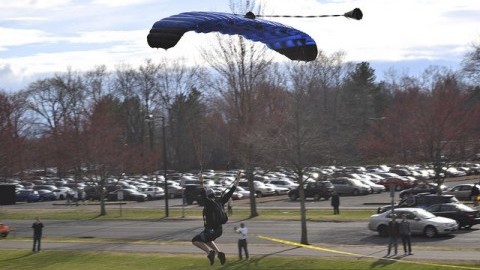 At 3:30 p.m. Friday, the trio was on the ground preparing to make its way to “Jumptown.” The sky was overcast and the clouds continued rolling in, a thick blanket of gray looming above.

Less than 90 minutes later they were in a plane, flying at 3,500 feet, the speed on the craft steadying at roughly 70 miles per hour as the University of Massachusetts approached. Then, just as the sun broke through the clouds, warming the faces of the crowd that had begun to gather on the ground to observe, they jumped.

“Coming over those buildings and looking down at Southwest (Residential Area) – (it was) unreal,” said Matt Leonard, a UMass alumnus, who developed an interest in this sport after being around his father who started skydiving in Northampton in 1994. By 2010, he had started himself.

Leonard was one of three people who actively participated in a skydiving showcase presented by the UMass Skydiving Club, a Registered Student Organization dating back to 1959, which spent the weekend exhibiting its skills across campus at events such as Southwest Week. And while the club has only about four active members, there are about 200 others who participate in events sporadically.

“We’ve been down here the last couple of days checking out the landing areas, the winds, coordinating with our pilots, getting our aircraft ready, to make sure everything goes smoothly,” said Nate Clark, an alumnus of Trinity College in Hartford, Connecticut, who did a tandem jump right when he turned 18 years old and has been hooked ever since. “Anytime you have to put in those extra efforts, it’s nice when things go off without a hitch.”

“A lot of students don’t even know there is a skydiving team. So the more they can show off what they can do, the better,” said Emily Hajjar, a graduate student who served as an adviser for the Skydiving Club’s jump Friday.

“One thing that people don’t get is that you really view (skydiving) as a team sport,” Clark said. “It’s not that you’re terrified of jumping out of a plane, but you’re doing cool things in the air with other people.”

And according to vice president of the club, Casey Tylek, unlike Leonard and Clark, who have 1,600 and 1,200 jumps under their belts, respectively, you don’t need to be a professional to get involved.

Events offered to students each semester usually include two tandem trips, where a typically inexperienced skydiver is strapped to someone else during the jump, two indoor skydiving trips, where interested participants travel to New Hampshire to skydive inside a wind tunnel, and one first jump course, which is a six to eight hour training session to educate those who want to jump with a parachute on their own. These opportunities, according to Tylek, give students a chance to explore something new.

“Anybody can skydive,” he said. “The only thing stopping (students) from skydiving is their own fears.”

And according to Tylek, skydiving comes with a feeling you can’t get anywhere else – a sense of independence you only feel when you are airborne.

“It’s complete freedom,” he said. “For me, when I leave the plane, I have no worries. All the stresses

about homework or tests  or work – it just flies out the window.”

“(It was) awesome, we jumped into UMass,” Leonard said, recalling his feelings as he touched ground on campus Friday. “There’s very few people in the world who can say they’ve done that.”

And while the club emphasizes the rush of skydiving, there are also a lot of preliminary steps that need to be taken to ensure everything goes according to plan.  For demonstration jumps, Leonard said there is a variety of federal and state paperwork that needs to completed, including forms that need to be filed with the Federal  Aviation Administration, which regulates skydiving.

“We need to make sure we stay within our regulations to maintain safety and coordination,” Leonard said. “Having that coordination with the state and federal agency is definitely a big factor.”

And as someone who has skydived about 326 times himself, Tylek also wants to reiterate the importance of safety. During a canopy course, Tylek  was coming in for his final landing nearly 50 feet off the ground, when a gust of wind pushed his parachute directly downward. He luckily was able to pull on his risers, which connect the harness to the parachute, and straighten out, but the experience has since reminded him of the importance of safety.

“We try to do yearly safety day trainings so we don’t get complacent,” he said, adding that there are a lot of preparations that go into each jump to perfect the process as much as possible.

First for demo jumps, according to Tylek, the group needs to select a landing area around 60 feet wide and 200 feet long, making sure it is clear of obstacles such as large buildings, power lines, trees and people. Second, they identify alternative landing spots in case there is a last minute change. They then make sure whoever owns the land approves of the jump and that all has been filed appropriately with the FAA.

When all is said and done, they have the go-ahead to find a pilot and air and ground crew to prepare for their departure out of “Jumptown,” a dropzone in Orange. With all their gear, including parachutes, helmets and eye protection, they can  then get ready to jump.

Yet despite the dedication necessary to make that all possible, the club hopes skydiving still peaks students’ interest.

Leonard, who was president of the club for three years when he was a UMass student, reiterated the fact that even after you graduate and enter the real world, you should still pursue what you love. For him, that love is skydiving.

“Do whatever you want. We’ve graduated, we have real-time jobs, but what don’t let go of the fun things we want to do in life,” he said. “If you are happy with what you do you never work a day in your life, right?”