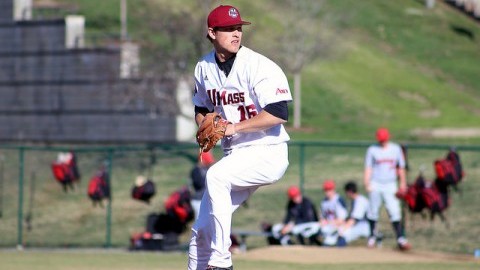 The Massachusetts baseball team appeared to be on its way to salvaging the finale of a four-game series against Florida Gulf Coast but three Eagles runs in the eighth and a walkoff home run in the ninth squandered these hopes, as the Minutemen fell 5-4 Sunday in Fort Myers, Florida.

“He pitched real well,” Minutemen coach Mike Stone said. “It was the best performance of any pitcher this weekend. He got us late into the game and gave us a chance to win.”

LeBlanc was relieved by fellow senior captain Andrew Grant, who surrendered three runs in the eighth and junior Ben Panunzio, who blew the save in the ninth and took the loss.

Trailing 4-3, Tyler Selesky walked to lead off the final inning for the Eagles and Nick Rivera followed with a two-run homer in the next at bat to end the game.

“We were in a real good position to win the ballgame and it just didn’t happen,” Stone said.

UMass opened the game building a 4-0 advantage, led by the bat of Mike Geannelis. The sophomore first baseman finished 3-for-5 with two runs batted in. His single in the first inning drove in Kyle Adie and put the Minutemen up 1-0.

Adie had another strong day at the plate for UMass as well, going 4-for-5 with two runs. He improved his batting average to .351 for the season.

But in the bottom of the eighth, Florida Gulf Coast (24-9-1, 7-4 Atlantic Sun) loaded the bases for catcher Blake Berger. The senior cleared the bases with a double to left-center field to reduce the Minutemen’s lead to 4-3, setting the stage for the Eagles’ ninth-inning comeback.

Sunday’s loss ended a weekend of struggles for UMass. The Minutemen were outscored 46-12 in the sweep, including an 18-5 defeat in Friday’s series opener.

After winning five straight to get their record to .500 at 11-11 on April 15, UMass has now dropped nine consecutive games – although just three have come in conference play.

Minutemen drop both in doubleheader

After losing the series opener 18-5, UMass continued to slump in Saturday’s double header, falling 15-1 and 8-1.

It was a rough outing for sophomore Ryan Moloney in the first game. He surrendered nine runs in 42/3 innings while allowing 12 hits and four walks.

Geannelis scored the only run of the game in the fourth inning for the Minutemen, capitalizing on an error to get UMass on the board.

Rivera preceded Sunday’s heroics going 3-for-5 in game one, driving in four runs and adding a home run. Selesky also had a strong afternoon, finishing 5-for-6 with three RBIs and four runs.

Redshirt junior Tim Cassidy entered the game in relief of Moloney and surrendered six runs in 31/3 innings of work.

The Minutemen got off to a quick start in game two as Vinny Scifo singled and was later driven in by Bryce Maher to put UMass up 1-0 in the top of the first inning.

But the Eagles answered with three runs in the bottom frame and two more in the second inning to take the lead for good.

Ryan Venditti took the loss to move to 2-1 on the season, after giving up six runs in five innings of work.

Ross Gienieczko can be reached at [email protected] and followed on Twitter @RossGie.