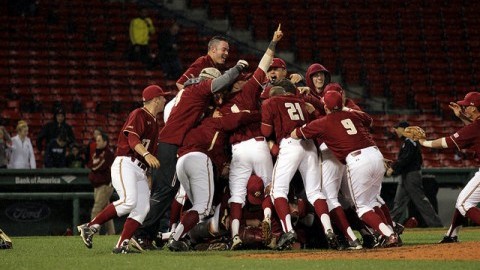 BOSTON — For the third straight year, the Massachusetts baseball team came up short in a battle for statewide bragging rights in the Beanpot Championship.

Flanked by the Green Monster and surrounded by the confines of Fenway Park, the Minutemen fell to Boston College 2-0 Wednesday evening, squandering a solid pitching performance.

Both teams received excellent pitching performances from their starters and bullpen, but UMass (11-16, 7-9 Atlantic 10) couldn’t muster enough offensively to edge the Eagles.

Mike Geannelis got the start for the Minutemen and pitched five innings, allowing five hits, two runs, while striking out three and walking two. The UMass bullpen kept the Minutemen in the game, but to no avail.

“I thought they really performed well and did a great job,” UMass coach Mike Stone said. “They battled, they made pitches when they had to, they got themselves out of jams. They were real impressive and I was real proud of their performances.”

After a shaky start in the first inning, where he gave up two hits, including a homerun to Joe Cronin to give BC a 1-0 lead, Geannelis settled down by pitching three straight scoreless innings and only allowing one baserunner.

The right-hander found himself in trouble again when Boston College loaded the bases in the top of the fifth with only one out.

Geannelis limited the damage, only allowing one run. After an RBI single from Jake Palomaki to extend the Eagles’ lead to 2-0, Geannelis got the next batter to ground into an inning-ending double play.

Junior Ben Panunzio replaced Geannelis in the sixth and pitched shut-out ball for the final four innings. But it wasn’t a walk in the park, as Panunzio had to pitch himself out of trouble on multiple occasions.

In the sixth, after walking Logan Hoggarth to load the bases, Panunzio caught Stephen Sauter looking at strike three to end the inning. Then in the seventh, Boston College got a runner to third, but he would be left stranded as Panunzio struck out Cronin to end the inning

But once again, the UMass bats were silent, as it was shut out for the third time in the last five games.

“We saw some good pitching on the mound today and we just didn’t do enough offensively today,” Stone said of the lack of offense.

Five different Boston College pitchers held the Minutemen to four hits and they did not get a baserunner past second base for the entire game.

Vinny Scifo and Adam Picard were the only UMass players to reach second base, as both had doubles. Picard extended his streak of getting on base to 16 games.

A season ago, the Minutemen lost to Harvard in the Beanpot final 3-0. The season prior, Northeastern topped UMass 6-3 at Fenway Park.

But even with the loss, both Stone and Geannelis were grateful for the opportunity to play at Fenway.

“It was a huge honor getting the start. It’s a dream come true really,” Geannelis said. “Coming here as a kid all my life, seeing all the players play on this field, it was definitely awesome looking up at the mound and seeing where you’re playing.”

“It’s a tremendous experience.” Stone said. “All these kids are from Massachusetts and all are Red Sox fans for the most part. It’s just a special day for them to have a chance to play here.”

After winning five straight games to get back to .500 earlier this month, the Minutemen find themselves losers of five straight. The Minutemen will look to put an end to their current losing streak when they travel to take on Florida Gulf Coast Friday.