UMass comes up short in 10-9 defeat to Fairfield 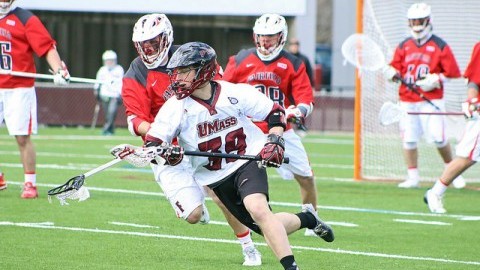 The Massachusetts men’s lacrosse team could not overcome a four-goal deficit despite a five-goal fourth quarter en route to a 10-9 to Fairfield Saturday afternoon.

Heading into the final 15 minutes down 8-4, the Minutemen (3-7, 1-2 CAA) cut the deficit to two with nine minutes, 34 seconds remaining on consecutive goals from Nick Mariano and Kurt Hunziker.

Following a goal from the Stags (7-4, 2-0 CAA) that pushed the lead back to three at the 8:10 mark, each team traded tallies before Buddy Carr found the back of the net twice to make it 10-9 with two minutes, 52 seconds remaining.

Although UMass got one last defensive stop to get one final chance to tie the game, Fairfield’s zone defense stepped up as it did all game, preventing the Minutemen from producing the equalizer after Brendan Hegarty’s shot was stopped.

“I thought we got a good luck at it,” coach Greg Cannella said. “Obviously Nick (Mariano) draws a lot of attention, and he did. Even in the zone, you have to be aggressive and draw a slide.

“We drew a slide, Brendan had it, we would’ve loved to see him put that in that back of the cage, but again, give Fairfield credit for making a big play in a big spot.”

Frustration was the word that Cannella used when discussing his team’s second consecutive defeat.

“I’m frustrated, our guys are frustrated,” Cannella said. “Fairfield earned it, they’re a very good offensive team, played a ton of zone on us today, and it gave us some trouble.

“Again, some missed opportunities, but that’s gonna happen in every game. In the third quarter when they jumped out to that lead there that was a difference in the game for sure.”

Carr added that although he felt the Minutemen were prepared for Fairfield’s physical zone defense, UMass couldn’t maximize its opportunities on the attack.

“We knew what we had to do,” Carr said. “We fought hard and played well, we just couldn’t execute on the offensive end.”

With the score 5-4 heading into the second half, the Stags found the back of the net three more times against Minutemen goalie Zach Oliveri, extending the lead to 8-4.

UMass was unable to score the entire quarter, marking the fourth time this season it went a full 15 minutes without a goal.

Cannella pointed out Fairfield’s zone defense as a main reason for his team’s inability to execute on the offensive end. When discussing the Stags’ defensive strategy, he likened it to college basketball.

“It felt like we didn’t score for three days for a while there,” said Cannella in reference to his team’s offensive drought in the third quarter. “It’s like in college hoops, you need guys who can shoot the threes and they’ll eventually come out and play you.”

Andrew Sokol, who recorded a goal and an assist in the losing effort, was disheartened with the outcome but also credited the opposing defense for UMass’ struggles.

“It’s a little disappointing, but it is what it is,” he said. “Their (defense) played great, we tried to get the ball up the field but had limited possessions in the third quarter and we weren’t able to capitalize on the possessions we had.”

Cannella lamented the lack of urgency his team showed until they found themselves down by four after three quarters of play.

“You ask your guys to have a sense of urgency for 60 minutes, I don’t think we’re asking too much,” he said. “In those situations, it’s ‘now or ever’ so the guys have that ‘now’ attitude and honestly, you need that attitude for the entire game and not just the fourth quarter.”

While the zone defense presented problems for the Minutemen, Stags sophomore goalie Tyler Behring had an outstanding game at the backend, making 12 saves in the win.

“He made one great save on Pete (Lindley) and then on Buddy,” Cannella said. “Give him credit, he’s been saving at 76 percent. As a young guy jumping in there, he’s playing with a lot of confidence.

“Obviously they’re playing some zone defense so they have confidence in him making stops, which is great for him and great for the team.”

Next up for UMass is its final nonconference matchup at Hartford where the Minutemen look to avoid their second three-game losing streak of the year.