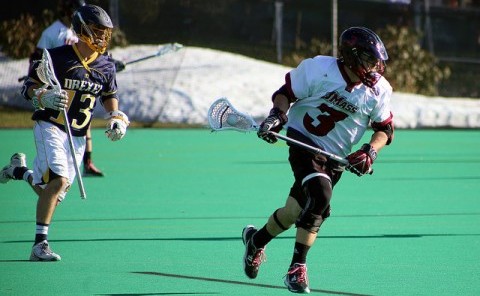 With time winding down in the fourth quarter and the score tied at nine apiece, the Massachusetts men’s lacrosse team forced a turnover against Delaware with a chance to win the game Friday night.

But when the Minutemen (4-9, 2-3 Colonial Athletic Association) attempted to get the ball out of their zone, disaster struck as they handed the ball right back to the Blue Hens, who for the second straight year upset UMass on the final day of the regular season.

On the ensuing possession, Delaware regained the lead on a Jackson Finigan goal with 41 seconds left. It was Finigan’s fourth of the game, leading all scorers as the Blue Hens prevailed, 10-9.

Minutemen co-captain Ryan Izzo, who was one of seven seniors honored before the game, called the last moments of the game “heartbreaking.”

“Any time you come back and the game’s tied and then you lose it in the last 40 seconds, that’s kind of a heartbreaker,” Izzo said. “Especially since it was Senior Night and the last home game for many of us.”

Izzo was involved in both teams’ consecutive turnovers with under two minutes remaining. As Delaware held possession, an Izzo poke check led to a loose ball picked up by UMass, who appeared to be carrying all the momentum after a Nick Mariano goal four minutes before capped a four-goal comeback.

But a few seconds later, Minutemen defender Kyle Karaska passed the ball back to Izzo, who mishandled it, leading to another loss of possession.

“It was a little bittersweet there,” Izzo said. “I lost the ball in the light when Kyle (Karaska) was throwing it to me on that clear. I scooped up the groundball and then it got checked away and unfortunately gave the ball back to them.”

Izzo added that the play was the “story of the day” for UMass, who couldn’t get into any consistent flow offensively or defensively.

Trailing 7-3 at the half, UMass followed on a 6-2 run, tying the game after goals from Grant Whiteway, Grant Consoletti, Andrew Sokol, Gianni Bianchin and Mariano.

But in the end, Friday’s loss was just another comeback attempt fallen short and something that Minutemen coach Greg Cannella has seen too many times this season.

“I felt we blew the opportunity but give Delaware a lot of credit, they played really well,” Cannella said. “Same old, same old for us. We fell in a hole and tried to claw out of it. You get in a spot where you tie it up and can’t make a play.”

Faceoffs once again proved to be an issue for UMass, who won 8-of-22 draws. Splitting time on the faceoff, Kurt Hunziker was 5-for-11 while top option Charlie Schatz finished only 3-for-11.

Cannella voiced his frustration regarding inconsistencies in faceoffs.

“We thought Noah Rak was going to come around for us, he’s out for the year,” Cannella said. “Kurt fills in, but he’s a guy that’s never taken a faceoff in his life until this year. We’re just asking someone to go out there and scrap.”

In cage, it was a tale of two stories regarding the play of each team’s respective goalies.

UMass’ Zach Oliveri gave up seven goals before being pulled in favor of D.J. Smith while Delaware goalie Brett Anton was credited with 18 saves in the victory.

“(Anton) played well, although I don’t think we shot particularly well,” Cannella said. “We missed the cage and hit some pipes early in the game but he hung in there and played well. He’s been solid for those guys all year long.”

Despite the loss, the Minutemen clinched a spot in next week’s conference tournament thanks to outside help from Fairfield. The Stags knocked off Hofstra 5-4, meaning UMass will either receive the third or fourth seed.

For Cannella, backing into the postseason isn’t something he likes but he knows next week the mentality of a “fresh start” will be in play.

“It’s not gonna make it any easier, but you do have to make it that way,” Cannella said. “Everyone is 0-0 and everyone’s got an opportunity.”