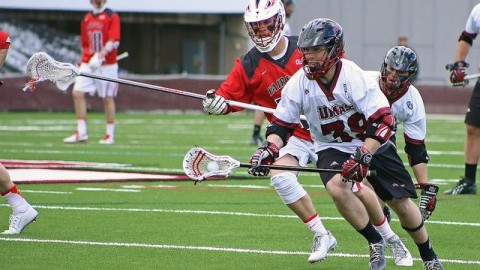 Dom St. Laurent runs past a Fairfield player in an attempt to make a goal. (Robert Rigo/Daily Collegian)

The view from the outside looking in is never fun when it comes to making a conference tournament.

Currently, it’s the view that Massachusetts men’s lacrosse team has, as it is currently outside of the top four teams that qualify for the Colonial Athletic Association conference tournament.

Despite all of the struggles and close defeats the Minutemen (3-8, 1-2 CAA) have suffered, there is still a glimmer of hope, and it starts Saturday afternoon at Garber Field when they take on Drexel, which is currently one game ahead of them in the standings with a 2-1 conference record.

At this time, UMass is only one game back of the second position in the conference, but also only one game ahead of last place Delaware. Head coach Greg Cannella knows that with the closeness of the standings, the time to win is now.

“We’re 3-8, so getting a win for us means a ton, regardless of what the standings say,” he said. “We would’ve loved to get a win last week but we didn’t, and every week you go into it looking to get a win.

“I think this group has to focus more on playing at a high level and great intensity,” he said.

Redshirt senior and co-captain Ryan Izzo said that all year the message to the team is to not give up.

“We’re just trying to preach to the guys to keep fighting,” Izzo said. “We’ve had a tough stretch these past three games, and really this whole year for us. It’s been (an) up-and-down for us, but we have a great opportunity this Saturday with a great team in Drexel coming in.

“It’s a home game for us back on Garber, so we’re just trying to tell the guys to keep fighting and keep the energy levels high and stay focused and get ready to fight on Saturday,” he said.

As one of the leaders on a team filled with youth, Izzo knows it’s important to keep the guys focused on the task at hand and not worry about how other teams are doing around them.

“Obviously that’s been the mentality that the seniors and myself have to take into consideration every time we step on the field,” he said. “We’re just trying to motivate the guys and keep the focus up each day so on game day we’re ready to go.”

“Hopefully they’re pretty well-versed with that, we talked about that all year long,” Cannella said. “You prepare each week for Saturday, and if you’re focused on something else, you’re going to get your butt kicked.”

“I haven’t had a victory over them in a couple years now, so personally this is a key game for me,” Izzo said. “This is an important game for the team also, for conference and for setting a possible foundation for getting into the playoffs.”

If there is one advantage UMass has heading into these last two games, it is the fact that both will be played in Amherst. Being back on the AstroTurf of Garber Field definitely presents UMass with a home field advantage, something Izzo said he has been looking forward to all year.

“If that doesn’t get you going, then you shouldn’t be playing sports, honestly,” he said. “Home games … are a great opportunity and we should cherish the moment and go out and execute.”

Since they have played all home games at McGuirk Stadium this season, the Minutemen will have to adapt quickly when heading back to Garber Field. Izzo, however, doesn’t think it should be too much of a transition.

“It might set us back a day or two, but I don’t think it’ll affect us in the long run,” Izzo said. “We’ve been playing there for years now. Garber is our home, so we’re glad to be back there.”