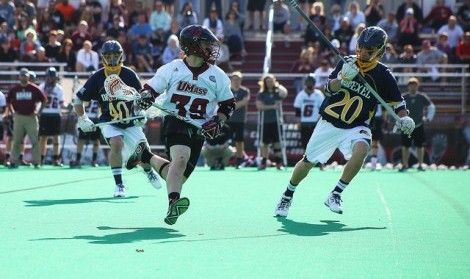 When the AstroTurf at Garber Field was damaged this past winter, the Massachusetts men’s lacrosse team was forced to play its first five home games of 2015 at McGuirk Stadium.

But Saturday afternoon, UMass returned to its real home, and what a return it was.

On one of the nicest days of the year in front of 642 fans, the Minutemen (4-8, 2-2 Colonial Athletic Association) defeated Drexel 12-9 in their first game on the field since last April.

After being asked how it felt to be coaching back on Garber Field, 18 seconds passed before coach Greg Cannella could gather his thoughts.

“No better feeling, for me personally,” he said. “Hopefully it’s the same way for the rest of the guys.”

Following the conclusion of the game, fans and alumni gathered onto the field to celebrate the victory, a feeling that hadn’t been felt at that location since last season’s 12-6 victory over Hartford on March 22, 2014.

Leading the way offensively for UMass Saturday was Dan Mueller, who registered a hat trick in the victory. Muller said he could feel the energy provided from the fans throughout the entire game and was appreciative of the support the team received.

“It was incredible, the fans were really into it, the bench was really into it, we were just pumped to be back here the whole week,” the redshirt sophomore said. “Going into the year we were really looking forward to playing on here and then something happened and we weren’t allowed to.”

Muller added: “It’s an honor to play on this field and look back and see all the alumni after the game and see how proud they are of us and all we’ve achieved. It was a great win and good to be back here again.”

As one of six UMass seniors, Brendan Schroeder was ecstatic to be able to get back to playing on a field he’s gotten to know over the last four years.

“Just being back on Garber was unbelievable, getting to practice this week, it feels like an eternity since we’ve been on it,” he said. “There’s so much energy, pride, all the alumni came back for it, and it’s just a great time.”

Goaltender Zach Oliveri, who stood tall in cage with 14 saves, had similar thoughts to his teammates.

“It’s huge, it’s always great to be back here in front of a great crowd,” he said. “I thought the team came out great with a lot of energy and excitement.

“We’re excited for Friday night with another chance on Garber,” Schroeder said.

Besides the win, UMass was also celebrating Cannella, who coached his 300th game Saturday in 21 seasons in charge of the program.

“It felt great, it’d be great for him to one day get a 300th win, that would be very important,” Muller said.

“To be a part of his 300th game coaching is a very big deal because I look up to coach a lot, he’s a great guy and has taught me a lot throughout my years here, so it’s very important not just to me but for the whole team.”