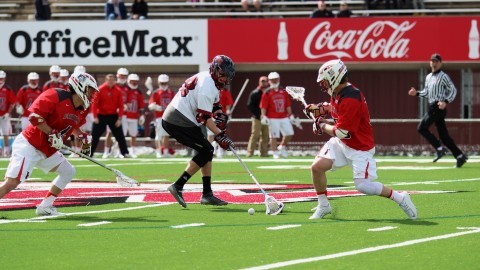 The struggle on offense continued for the Massachusetts men’s lacrosse team in its 15-8 defeat at Hartford Saturday.

Now on a three-game losing streak, UMass (3-8, 1-2 Colonial Athletic Association) hasn’t reached double digits on the scoreboard since its 12-8 win over Penn State on March 14.

“Our guys were poorly coached,” Minutemen coach Greg Cannella said after Saturday’s loss. “We didn’t do a good job at getting our guys ready to play this week as a staff. That really falls on my shoulders.”

UMass took the first lead of the game off a Peter Lindley goal three minutes, 25 seconds into the first quarter. After the Hawks (7-4, 3-1 America East Conference) then tied the game two minutes later, Dan Muller recorded his 10th goal of the year to recapture the advantage.

But Muller’s tally with 5:48 left in the opening frame was the last time the Minutemen held control, as Hartford answered with a 13-1 run that lasted into the first four minutes of the fourth quarter.

During this stretch, UMass went through two scoring droughts of 17 and 22 minutes. The Minutemen’s lone goal in this time came from Grant Whiteway in the second quarter, momentarily putting a halt to a 6-0 Hawks’ run.

According to Cannella, familiar problems with possession control limited UMass on the attack. The Minutemen handily lost the battle for faceoffs (17-to-10) and ground balls (36-to-20), allowing Hartford to establish control in the middle two quarters.

“We couldn’t win faceoffs, we couldn’t get ground balls and again, we were poorly coached,” Cannella said.

“We couldn’t get anything going. We got bullied.”

Sophomore attacker Brendan Hegarty added that failing to capitalize on the scoring chances they did receive has hindered the Minutemen during their four-game streak of scoring less than 10 goals.

“It’s disappointing not putting up the numbers we want,” Hegarty said. “We try to get 10-plus (goals) a game but the past few games, we haven’t been executing well enough to do that.

UMass’ struggles on Saturday weren’t limited to the offensive side however, as its 15 conceded goals on defense marked its highest total since Feb. 28 against Brown, when the Minutemen lost its fourth straight to open the season, 18-12.

In cage, senior Zach Oliveri and freshman D.J. Smith split time, finishing with a combined seven saves. After Oliveri failed to stop any of the first six shots taken against him, he was replaced by Smith midway through the second quarter. Oliveri later returned and finished with one save and eight goals allowed.

Despite early struggles, UMass once again heightened its play in the final quarter, as it did in its 10-9 loss last weekend to Fairfield. The Minutemen outscored the Hawks 5-2 in Saturday’s closing 15 minutes to bring the deficit back to single figures.

Hegarty and Andrew Sokol each scored two goals during UMass’ late run as Whiteway also added his second of the day.  But according to Hegarty, the Minutemen must display this intensity more consistently over the course of a game.

“We’ve been trying to preach that all week, just trying to play with a sense of urgency all game,” Hegarty said. “We have to play at that pace for the entire 60 minutes.”

While Saturday’s loss to Hartford – its last nonconference matchup of the season – didn’t count toward UMass’ position in the conference standings, the Minutemen currently find themselves out of the CAA playoff picture, sitting in fifth place.

With two games remaining however, UMass will try to position itself within the top four teams that qualify for the CAA tournament. Both upcoming matchups against Drexel and Delaware will be played in Amherst.

“We’ve got Drexel coming in and Delaware the next two weeks and they’re both must-win games for us,” Hegarty said.