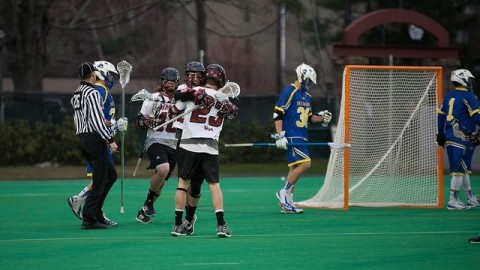 In a season that started with five straight losses, the Massachusetts men’s lacrosse team will now have the opportunity to play for a conference championship and an automatic bid for the NCAA tournament.

It wasn’t easy, though.

Following Brendan Hegarty’s third goal of the game to extend UMass’ lead to 9-5 with five minutes, 35 seconds remaining, the Stags (9-6, 4-1 CAA) scored three unanswered times, culminated by Drew Federico’s tally with 58 seconds left to cut the Minutemen’s deficit to one.

But UMass won the ensuing faceoff and ran out the clock to clinch a spot in the conference title game for the first time since 2012.

“Obviously it was a great win on the road as a four seed against a one seed,” coach Greg Cannella said after the game. “The guys didn’t start out great (in the first quarter) but they recovered and outscored them 9-6 after that.”

The Minutemen trailed 3-2 at the end of a low-scoring first half. But the main takeaway, according to redshirt sophomore Dan Muller, was that in spite of not playing well, they were still in it.

“The message was pretty much we didn’t even play that great of a half and we were only down by one,” Muller said. “Offensively we struggled, defensively they were doing their job and we just weren’t playing our game offensively.

“So that was really the message, that the offense needed to step it up and needed to start playing our game. The defense kept doing their job and the offense stepped up so we were able to come away with the win.”

The message was well-received coming out of the intermission.

UMass came out firing to start the second half, scoring five of the first six goals to build a 7-4 advantage heading into the final 13 minutes of the game.

The Minutemen were led offensively by the trio of Hegarty, Muller and Andrew Sokol, who combined for seven of the team’s nine goals.

Muller added: “We came out a little slow in the first quarter but after that, I think we were right back in it. I think we started playing our game and dictating the tempo so it was definitely a great team effort.”

Hegarty acknowledged UMass might have been a little jumpy out of the gate but added that the team steadied itself over the last two quarters.

“We just settled down a bit,” he said. “I think some of the guys in the first half were a little excited, you know emotions are high in a playoff game. In the second half we settled in and started playing our game.”

Cannella emphasized, as he has all season long, regardless of the position his team is in, the Minutemen have battled to the finish.

And it paid off Thursday.

“Our players have been fighting all along,” Cannella said. “It’s great that they came out and won tonight and now know the formula for success. To be in this position, hopefully they don’t take it for granted.”

Saturday’s championship game against the Tigers is set for a 1 p.m. start.