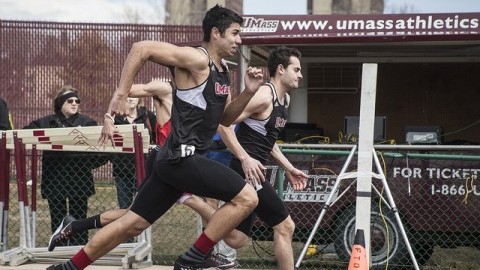 Not even howling winds could disrupt the Massachusetts men’s and women’s track and field teams from continuing their improved starts to the outdoor season, according to their respective coaches.

Minutemen coach Ken O’Brien and women’s coach Julie LaFreniere, as well as assistant coach David Jackson, left Saturday’s meet satisfied with their teams’ progress this season. Both the men and women compensated for events they were traditionally weak in on Saturday, showing off better depth than in the winter season.

On the men’s side, Northeastern won the event (242 points) while UMass finished next behind with 91.

“Coming in second was an outstanding performance for us today, we knew coming in that Northeastern was a clear-cut favorite and there were six teams fighting for second place and we came out on top of all of them,” O’Brien said.

The Minutemen’s depth helped them win gold in the 5,000-meter run.

At the beginning of the race, junior Ben Groleau took the initial lead in order to help younger runners Blake Croteau and Paolo Tavares conserve energy. This strategy, known as drafting, is an important factor in distance races and is one of the strongest displays of teamwork in track and field.

When the final lap approached, Tavares mounted a large enough kick to surge ahead and win the event. Croteau and Groleau finished fourth and fifth, respectively.

“Drafting is a pretty common tactic in track,” O’Brien said. “I know Ben Groleau wanted to help the younger runners in this race and he also wanted to expand into longer races.”

For the sprinting events, UMass showed its depth once again with a third place finish in the 4×10-meter relay. The team ran a time of 43.40 seconds, just 0.2 seconds off from its performance a week before. The team was composed of Patrick Farnham, Peter Farlow, Corey Adelson and Youseff El Korchi.

On the field side, Minutemen sophomore Brett Davies took first place in the shot put with a throw of 50 feet, 11.5 inches. Nicholas Gemino and John Chuma took second and third, respectively, in the pole vault.

Yet Jackson said he believes there’s more room for improvement on the field side.

“Pole vault was a little bit of a struggle today and I don’t want to blame it on the weather,” Jackson said. “The sun was still shining and the wind was mostly at our backs.”

The men’s team has been in the developmental phase for quite some time now. It spent the indoor season trying to mature young talent, and now it appears to be paying off. It’s still too soon to declare the Minutemen a polished and experienced contender but there’s excitement within the program.

“It could just be the home field advantage and the motivation that comes with running in front of a home crowd,” O’Brien said. “But either way, this was a very successful day.”

Many athletes on the UMass women’s team had to deal with more than just the whipping winds on Saturday.

While it’s normal for athletes to be sore and tight this time of the year given the high volume of training, it was evident that they may have reached a point where backing off is necessary.

Several runners, particularly in the distance group, were either forced to withdraw from nagging injuries or struggled to compete if they were able to.

Among those who pulled out were Courtney Neves, who did not compete at all, and Heather MacLean, who withdrew after finishing third in the 400-meter sprint because of calf pain. Other runners including Rachel Hilliard and Katie Powers struggled in their events noticeably due to similar issues.

“The distance group in particular needs a little down time at this point,” LaFreniere said. “Their legs are shot at this point.”

Yet the Minutewomen remained competitive, finishing third with 143 points, trailing Boston College (150) and Northeastern (147). The field events were particularly impressive as they filled in for a depleted distance team.

“Our field event athletes are progressing as they need to be right now,” Jackson said. “We’re piecing things together and everyone has either been putting up personal bests or are similar to where they were last year so I can’t complain.”

In the long jump, Courtney Kromko and Ashley Palmer finished first and second, respectively, providing a solid amount of points for the team.

Throwing events also provided a large boost. Emma Robinson finished first in the javelin with a personal best of 139 feet, four inches. Sara Wagner also finished first in the hammer throw with a distance of 150 feet, nine inches. Finally, there was the first and second place finishes by Alexa Fearing and Margaret Riseborough in the shot put.

There were also two young freshmen who excelled this weekend in Julia Witt and Colleen Sands.

Witt earned second place in the high jump with a height of five feet, 3.25 inches. Meanwhile, Sands competed in the first steeplechase of her career, but based on her beginning to the race, it was difficult to tell it was her first time running it. Though she had a strong start, fatigue would set in as she finished second in the race.

“She ran the race like a 3,000 without steeples,” LaFreniere said. “Which is why she started so fast and ended up hurting at the end, but that’s part of the learning curve, she has the experience and I expect her to get better at it”.

Next up for the Minutewomen is the Holy Cross Invitational, which takes place this weekend.