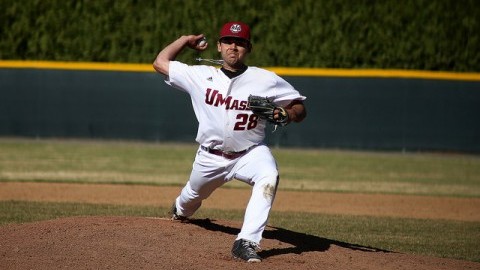 Another strong pitching performance from an unexpected source gave the Massachusetts baseball team their fifth win in a row Wednesday afternoon – a 4-3 win over Hartford at Earl Lorden Field.

Playing their sixth game in five days, the Minutemen turned to redshirt freshman Ryan Venditti on the hill against the Hawks. Venditt shut down Hartford in his first career start, going six innings allowing one unearned run on three hits. He also struck out a career high seven batters in the win.

“Ryan Venditti gave us a good outing on the mound,” head coach Mike Stone said. “He threw strikes, kept the ball down, worked ahead, worked fast.”

“It was pretty simple, just getting ahead with everything,” Venditti said of his performance. “I was throwing most of my pitches for strikes and just pounding the zone.”

The Minutemen (11-11, 7-5 Atlantic 10) are riding a season high five-game win streak, and their pitching is a big reason why. On the season, UMass has an ERA of 5.00, but its performance has been much better of late. Since the start of their weekend series versus St. Bonaventure, the Minutemen have been getting solid efforts from whoever takes the rubber.

Ryan Moloney struggled Saturday, giving up four runs in 3.1 innings, but Venditti came in and pitched 3.2 innings, giving up one run in the Minutemen’s first win of the weekend. Brandon Walsh followed that game up with a shutdown performance over St. Bonaventure. He tossed seven innings giving up one run, and Mike Geannelis pitched two scoreless innings of relief.

“Yesterday is really what we needed, to get a complete game from (Cassidy),” Stone said. “(Tim) just dominated and it was great to see from him.”

Venditti was ready to prove himself when he got the ball against Harford. He did just that, mixing his pitches and pounding the strike zone, lowering his ERA from 6.94 to 4.58 in his six innings of work.

“We did not know how long Ryan was going to be able to go,” Stone said. “But he got us through six and that was great, a real good effort.”

The Minutemen’s bullpen had another strong outing despite a lack of help in the field. Ben Panunzio threw two innings giving up two unearned runs, both coming as direct results of UMass errors. Evan Mackintosh had no trouble setting down the Hawks in order to record his second save on the year.

Stone was very impressed by Venditti’s performance and was happy with his command of the plate throughout the game.

“He had command of his curveball, his fastball, his change and we were just concerned about him going to deep in the game,” Stone said.

The Minutemen bullpen has been a major contributor in UMass’s wins. The combination of Geannelis, Panunzio and Mackintosh has given the Minutemen solid innings and shutdown efforts at the end of games.

Their five game win streak has been UMass’s best baseball of the season, and the pitching staff has been the main reason why.

“This week really we have been pitching well,” Venditti said. “As a team we have to be at our high point confidence-wise and as a staff we are pitching really well right now.”

The win streak will be tested this weekend when UMass travels to St. Louis to play the conference rival Billikens. The Minutemen will have one day off before their three game set against St. Louis.

“We’re heading into a big weekend with St. Louis,” Venditti said. “We’ve got to go out and win that series.”

Tyler Fiedler can be reached at [email protected] and on Twitter @Tyler_Fiedler.