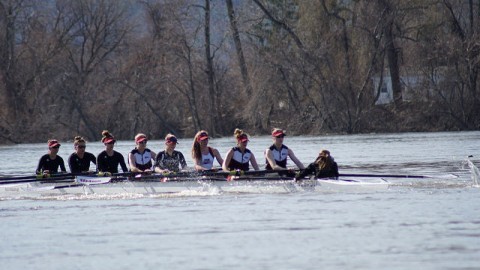 At the conclusion of its faceoff with Brown University, Boston University and Northeastern Saturday morning, the Massachusetts rowing team managed to earn two silver medals to cap off another strong performance.

“We had some great rows this week against some really stiff competition so the squad came away with a very positive result this past weekend,” UMass coach Jim Dietz said.

The Minutewomen recorded second place in both the Varsity Four and in the Third Varsity Eight.

In the most tightly contested race of the day, UMass’ Third Varsity Eight squad held back Northeastern and BU, claiming silver in a thriller that saw three boats finish within seconds of each other. With a time of 7:12, the Minutewomen finished just ahead of the other two boats, who posted times of 7:17 each.

“These are some very talented squads we’re talking, so the morale in the locker room seems to be very high after our last couple competitions,” Dietz said.

“This race took place at the Head of the Charles in Boston and the water current and flow of that river was fantastic,” Dietz said. “We soaked up all the water time we could because our river at home is still suffering from a lot of flooding.”

The Minutewomen now have two weeks off until their next competition. The break will be spent primarily for training, according to Dietz, as UMass hopes to work out the final tweaks to its lineups in advance of the A-10 conference championships held in Camden, New Jersey on May 2.

According to Dietz, the Minutewomen have been performing above expectations and have used some of their fellow conference opponents as comparisons.

“We look towards opponents within our conference and measure our performances based off how our competition performs against the very same opponent,” Dietz said.

Chris Martinez can be reached at [email protected]