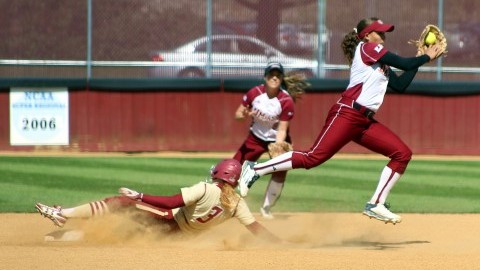 The Massachusetts softball team has struggled defensively all season long and Tuesday’s doubleheader against Boston College was no exception.

The Minutewomen made four errors in game one, including a throwing error by senior third baseman Anna Kelley in the top of the fifth that gave Boston College a 7-6 lead.

And while UMass (15-24, 8-11 Atlantic 10) eventually rallied back to take game one 8-7, Kelley still isn’t over the throwing error that could have potentially cost her team the game.

“Honestly it’s just us not coming to get the ball and making mental errors,” Kelley said. “Obviously, myself was one of the major ones. It’s knowing your opponent, knowing where the speed is. We just have to be better at knowing the situation.”

With two outs, runners on second and third, and a one-run lead, Eagle’s freshman Chloe Dubocq hit a soft grounder to third. Kelley came in strong and fielded the ball cleanly, but she rushed her throw, sending the ball wide of the first baseman and allowing Boston College to take the lead.

“Basically I just didn’t have my feet underneath me,” Kelley said. “I tried to throw it off balance, but maybe that’s something I just pick up and don’t throw and just one run scores.”

“I think she was trying to be aggressive,” UMass coach Kristi Stefanoni said. “She was trying to make the play, but at that point in time, with runners in scoring position and two outs, if her feet aren’t set and she doesn’t have a firm grip on the ball, don’t make the play.”

Stefanoni couldn’t pinpoint what has gone wrong defensively for the Minutewomen this season – the team ranks last in the A-10 in fielding percentage (.943).

Although the Minutewomen didn’t officially commit any errors in game two and defense certainly wasn’t the reason they lost, they were far from perfect.

Catcher Olivia Godin allowed two passed balls in the first inning, but she made up for it by blocking a handful of pitches in the dirt over the course of the game.

Shortstop Quianna Diaz-Patterson missed two hard grounders in the field, which though ruled hits, probably could have been scored either way.

However, Stefanoni did not see it that way.

“I think you look at a player like (Diaz-Patterson) and if she’s going to make a bad play off a hard hit, it’s definitely a hit,” Stefanoni said. “A kid like that doesn’t usually make bad plays. She played it, they ruled it accordingly. I was happy with it.”

The biggest blunder in game two came during the eight-run top of the third for Boston College. With runners on first and second and two outs, Eagles first baseman Chelsea Dimon singled right back up the middle.

UMass centerfielder Tara Klee fielded the ball cleanly and came up firing to the plate with a hard throw that appeared to be both on line and in time to get the runner from second trying to score. The only problem was first baseman Bridget Lemire attempted to cut off the throw, having the ball deflect off her glove and allowing the runner to score.

Although one run in a 16-0 loss may not seem important, the play could have ended the inning at 5-0 and sent the Minutewomen to bat in the bottom of the inning with some momentum. Instead, the run scored and the Eagles proceeded to add three more runs in the inning.

Kelley believes a limited amount of outdoor practice time this season has contributed to the team’s yearlong struggles defensively.

“Because of the weather we’ve had, we haven’t had a lot of time to be out on the field,” Kelley said. “Not that that is an excuse at all, dirt is dirt, but it will really help once we get to see a lot of grounders and work with each other out here a lot more.