UMass students came together to Stand Against Racism 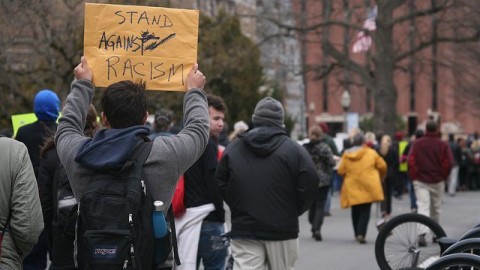 Throughout the week, the Center for Multicultural Advancement and Student Success led up to Friday’s Stand Against Racism Day by hosting lectures and events which focused on black empowerment and a collaboration against racism. On Earth Day, the “You Are Not Forgotten” event in Wilder Hall honored the countless people of color targeted by unjust acts of violence.

Friday at noon, protesters wearing Stand Against Racism buttons and t-shirts began their rally by listening to several speakers express an urgent need for recognition.

“Thousands of communities will stand together today to raise awareness in their own way,” said one opening speaker. “Our mission is educating and empowering one another to promote positive change on this campus.” He explained that public promotion for this event began with a photo campaign that used the hashtag, #standagainstracism.

“We must also remember the black queer women and transmen who are gunned-down at the same rate as black men are,” Ramona East, another opening speaker, said.

“Standing against racism is not a choice and is not a rally,” another opening speaker said. “It is every day when we are going to our classes. There is a lot of pressure on black students to be social justice educators, but the question is what can we do to take care of students of color?”

Students then marched from Haigis Mall to the Campus Center shouting chants such as, “Hands up, don’t shoot” and “Black lives mean we’ve got to fight back.”

Protesters marched through the Student Union, into the Campus Center, around the perimeter of Blue Wall and stopped in front of Harvest to perform a die-in protest.

One coordinator began the die-in saying “Michael Brown, murdered by … Darren Wilson.” Several black protesters then fell to the floor with each violent act declared. After a long list of victims and their murderers, all black protesters were then asked to lie on the floor for four and a half minutes to signify the four and a half hours that Michael Brown’s body laid in the street of Ferguson, Missouri. During these four and half minutes protesters sang “Strange Fruit” and “I Can’t Breathe.”

“The singing was so powerful I teared up a little,” UMass junior Isaac Wright-Lichter said. “Everyone should do something like this. Racial inequality is a problem and we need to act upon it.”

Protesters then marched toward Wilder Hall, where professional social justice leaders, such as Dr. Barbara Love of the International Reevaluation Counseling Community, led discussions about the ongoing prevalence of racism on the UMass campus as well as effective strategies for liberation.

One interactive workshop, “Black Lives Matter: Black (im)possibilities,” considered strategies against state violence by examining recent local and community responses. Another, “Jane Elliott’s Blue Eyes/Brown Eyes Exercise,” aimed to expose participants to the realities of racism by labeling participants as inferior or superior based on the color of their eyes.

There were also workshops on Islamophobia and on queer and trans people of color, in which personal stories and reflections were shared for strategies of eradication and support.

The closing ceremony included announcements, performances and finally a recitation of the Pledge Against Racism. Ray Elliott of the National Center for Race Amity announced that the second Sunday in June will be “Race Amity Day,” which promotes an outreach across cultural and racial barriers to make meaningful friendships that create change.

“We must establish a space for people to come together to talk about what it means to be human,” Elliott said. “We need each other.”

“Standing against racism means nothing if you don’t stand up for feminism,” she said.

Several presentations from the Phallacies explored issues of gender, race and inequality.

“We’re here to communicate three things on behalf of everyone affected by racism on this campus,” said Gabrielle Palmer, co-president of Black Student Union and coordinator for Student Bridges. “One is to know what love is. Two is to understand that we can love each other. And three: regardless of everything, we all know what it feels like to be stepped on, told that you can’t do it or told that you will never make it.”