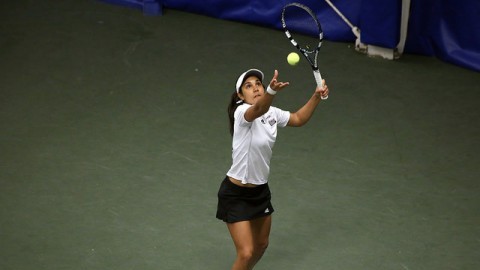 Virginia Commonwealth was up handily 3-0 against the Massachusetts women’s tennis team in the Atlantic 10 Conference Championship Sunday and was one win away from securing its third conference title when the Minutewomen began to mount a comeback.

After dropping the doubles point as well as singles No. 1 and 3, UMass won the first sets in all four remaining singles matches. Ana Yrazusta and Carol Benito, following their first doubles match loss since late February, battled back in individual play winning the first sets in each of their matches in dramatic tiebreakers, putting the Minutewomen back on track as they sought their first conference title since 2001.

Anna Woosley followed suit, winning her first set (7-5). With the tide turning in UMass’ favor and senior captain Chanel Glasper well on her way to winning at No. 6 singles, it looked like the A-10 title match was going to come down to the wire.

But a cruel twist of fate struck the Minutewomen.

Leading 6-5 in the second set after winning the first set 6-3, Glasper was just a few points away from winning her match and kick starting a UMass comeback when she suffered an injury to her right Achilles. The injury was too severe to play through and Glasper was forced to retire, giving up the No. 6 singles point as well as the match to VCU.

It was a crushing blow for the Minutewomen senior, who won the first set 6-3 and was leading in the second set 6-5 before being forced to retire.

Glasper ends her career as the school’s career leader in singles wins with 77, a record which she broke this year.

To reach the title match Sunday, the Minutewomen first had to defeat the No. 2 seed Richmond.

The match was dominated by UMass as the Minutewomen rolled past the Spiders 4-0 to clinch a spot in the championship match. It was the second straight year UMass eliminated Richmond from the conference tournament.

The Minutewomen started the day strong, securing the doubles point behind wins from Woosley and Glasper (8-1) as well as the record-setting duo of Yrazusta and Benito (8-5).

The fiery Spaniard Yrazusta and Benito – a junior transfer from Tulsa who has had a fantastic year of her own – teamed up to post a 27-6 doubles record in their first year in Amherst, breaking the school record for most doubles wins in a season. The previous mark, 24 wins, was set by Candynce Boney and Masha Pozar in 2008.

Following doubles play, UMass continued to press its advantage. Yrazusta, Arielle Griffin and Woosley finished off straight-set victories, earning the first A-10 title shot for the Minutewomen since 2012.

In the first two rounds of A-10 tournament action, the Minutewomen proved well-worthy of their No. 3 seed, easily dispatching lower seeds La Salle and Duquesne.

The Explorers, who failed to a win a match outside of their preseason, were outmatched by the Minutewomen, who secured their 15th win of the season, 4-0.

Woosley led the charge out of the gate, teaming up with Glasper to win a shutout in the No. 3 doubles match (8-0). Woosley carried that total command into singles play, defeating LaSalle’s Jayla Smith in the No. 5 singles spot (6-0, 6-0).

In the quarterfinals, UMass faced off against Duquesne and once again proved to be too much for the competition to handle. Despite the impressive play of Dukes freshman Kylie Isaacs – she scraped out Duquesne’s only win on the day at No. 1 singles – the Minutewomen overwhelmed their opponents in doubles and at the bottom of the singles lineup en route to a 4-1 victory.

Glasper recorded her record-extending 77th career singles win, her 18th of her senior season in the victory. Yrazusta and Woosley tacked on the final two wins necessary to vault the Minutewomen into the semifinals.