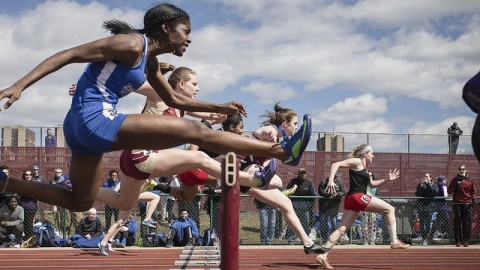 The Massachusetts men’s and women’s track and field teams each found success over the weekend at the Holy Cross Invitational, with the Minutemen earning a third place finish out of seven teams and the Minutewomen placing second out of seven.

The men’s team finished with 127 points, trailing only host Holy Cross (146) and meet winner Maine (175.5). Even with the team finishing in the top three consistently this season, UMass coach Ken O’Brien said he was still impressed and surprised with the performance.

“I would say more than half of our athletes exceeded my expectations for this meet,” O’Brien said. “The team is showing good depth and is definitely on an upward climb.”

The meet, held in Worcester, started Wednesday and Thursday with the heptathlon and decathlon, where UMass saw first place finishes from both teams. Kris Horn set a men’s school record for the decathlon with a final score of 6,623 against a field of 14 athletes. The Minutemen finished first and second in the event as Nick Ingham followed Horn with 6,293 points.

After the tone was set over the first two days, UMass kept the momentum going Saturday. It started with Greg Copeland, who earned a second-place finish in the pole vault after clearing 15 feet. Nick Gemino and John Chuma also tied for fourth in the event.

Also in the field, Brett Davies showed versatility with a first place finish in the discus throw and a second place finish in the shotput. Horn, building on his record-breaking performance in the decathalon, finished third in the shotput to give the Minutemen two of the top three finishers. Finally, Deion Arneaud won the triple jump in his first appearance of the year in the event, winning with a distance of over 44 feet.

In the running events, Peter Farlow was able to bounce back from a disappointing finish a few weeks back in the 400-meter hurdles with a first-place time of 54.30 seconds. In the 110-meter hurdles, freshman Logan Cotto finished second with a time of 15.69 seconds.

The Minutemen also continued to display depth in the distance events. Sophomore Tyler Hagan finished in second place in the 5,000-meter event with a time of 15:19.62. In the 3000-meter steeplechase, freshman Jay McMahon also finished second (9:44.45). In the 800-meter dash, freshmen Andrew Burke took third at 1:54.86.

“As we move further into the season, I’m starting to get an idea of what the team will look like and I think we will be a lot stronger at the end of the season then we were during indoor season,” O’Brien said.

The Minutewomen one-upped the men by finishing second over the weekend. Their 190 points trailed just Holy Cross, who won the meet with 218 points.

UMass continued to display its depth in the field events with a dominant performance in the triple jump. The Minutewomen took all three of the top spots in the event, with Courtney Kromko and Ashley Palmer finishing second and third respectively. Rebecca Stoyle, in her first triple jump performance since suffering an injury during the indoor season, won the event, jumping over 39 feet in her first jump of the season.

Palmer and Kromko also managed to finish first and second respectively in the long jump. UMass continued its dominance in the field in the shotput, with Margret Riseborough and Alexa Fearing finishing first and second with throws of 42 feet, eight inches, and 40 feet, three inches respectively. Nathalie Irmer also placed fourth in the event with a throw of over 39 feet.

On the track, several Minutewomen had bounce back performances, particularly in the distance events.

Rachel Hilliard finished first with a time of 17:08.21 seconds in the 5,000-meter run just one week removed from struggling in the Minuteman Invitational. In the steeplechase, Colleen Sands managed to take first-place after running out of steam in her first attempt at the race a week ago. In the 1,500-meter run, junior Carly Zinner finished second (4:43.21).

The UMass men’s and women’s teams will return to action this weekend in a pre-conference meet before participating in the Atlantic 10 championships on May 2 in Fairfax, Virginia.