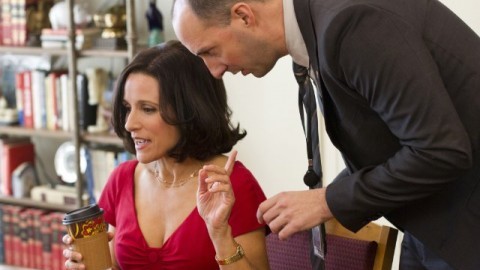 When Selina Meyer (Julia Louis-Dreyfus) abruptly became president at the end of the third season of HBO’s “Veep,” it was clear that the show was going to have to make some significant changes as season four approached.

“Veep’s” creative team confirmed they intend season four to be different from the preceding seasons by changing the show’s opening credits sequence. In the first three seasons of the show, each episode opened with patriotic music playing over newspaper clippings declaring Meyer the vice president of the United States. Now, the clippings in the new credits sequence declare Meyer the president of the United States.

“Veep” creator Armando Iannucci is known more for his brilliant way with words than for his narrative abilities, yet his decision to take the show’s plot in an entirely new direction was a stroke of genius. It provides new ways for the characters to interact with each other, new dynamics between old friends and brand-spanking new characters played, as usual with “Veep,” by some of TV’s best actors.

With Meyer as president, life has changed big-time for all the members of her team. However, Amy (Anna Chlumsky), who is running Meyer’s primary campaign and who, much of the time, is connected to the president exclusively via Skype, seems to be the least affected.

Jonah Ryan (Timothy Simons) is Meyer’s liaison to the new vice president; in the premiere he announces his arrival in the Veep’s office by shouting the following amazing combination of words: “Ladies be cryin’, pimps be dyin’, it’s Jonah Ryan.” He also refers to himself as “Jobi-Wan Kanobi.” As difficult as it is, I have to make myself stop quoting the great Jonah Ryan now.

Ryan begins to develop an interesting relationship with the V.P.’s chief of staff, Teddy (Patton Oswalt). Oswalt, a “Veep” newcomer, fits in very well here; he seems to have the unique ability to show up on any TV show and fit in wondrously (see his turn as Constable Bob Sweeney on “Justified” for a great example of this).

Mike McLintock (Matt Walsh) is now the White House press secretary. He enjoys his newfound fame, while geeking out with Dan Egan (Reid Scott) over being in the presence of the actual President of the United States every day at work. Egan, meanwhile, doesn’t have very much to do in these first couple of episodes. Nevertheless, he does get in a great zinger or two, especially during an office-wide meltdown at the end of the premiere (“My entire career just flashed before my eyes. It was very impressive.”).

Secretary Sue Wilson (Sufe Bradshaw) walks with Meyer from one meeting to the next, keeping Meyer up to date on her schedule. Bradshaw regularly gets overlooked, but is in fact one of the funniest performers on the show. Her terrifically dry delivery makes everything Wilson says a joy to listen to. One highlight is Wilson informing the president that the U.S. Poultry Association is concerned there are no current photos of the president eating eggs.

Yet the “Veep” character to receive the strongest and most important arc over these two episodes is poor Gary Walsh (Tony Hale). Walsh begins to discover that life as the president’s bagman is quite different than life as the Veep’s. Meyer no longer oscillates between tolerating Walsh’s presence and needing it – now she is far too busy to have any time for him at all. Feeling underappreciated, Walsh overcompensates and eventually makes a huge mess of things, negatively affecting international politics and the U.S.’s relationship with the Native American community. This conflict comes to a glorious head in a brilliantly played, gut wrenching shouting match between the president and her long-time assistant.

Speaking of Meyer, she is busy being the leader of the free world and has no time to interact with her staff members throughout the day. She brokers a peace deal with the Israelis while simultaneously teaching her daughter Catherine how to come off friendlier in press photos. She reacts questioningly to strange gifts and offerings from foreign prime ministers, amongst them a baby elephant and a bronze duck on a plaque. And Louis-Dreyfus kills it at every step along the way. She is a real comedic force, and even if the show around her weren’t as brilliant as it is, it would be worth watching for her performance alone.

“Veep” is one of the best shows on TV. It may well be the best comedy on TV. It’s a pleasure to watch, and I couldn’t be happier to have it back on HBO on Sunday nights. It was recently announced Iannucci will leave the show as it enters its fifth season. While this is certainly dispiriting news, since Iannucci was the driving creative and comedic force behind the show, “Veep” will likely return in top form next year. A show that has lasted this long without taking a dip in quality is unlikely to lose steam anytime soon.

Eli Fine can be reached at [email protected] and followed on Twitter @ElazarFine.