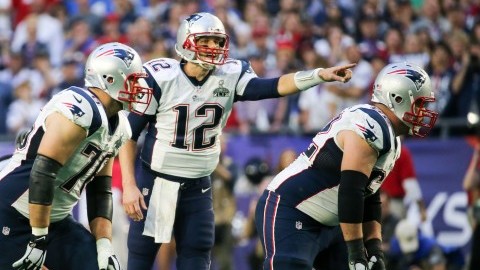 Deflated? Elated? Or just in the middle?
What are your thoughts on this mysterious riddle?
Perplexed or vexed or just on the fence?
Who did it?  Who dunnit? How, why and whence?
The football – the pigskin – did it squeal or stay silent?
In this game so beautiful but sometimes quite violent.
The gauge gave the clue – something’s surely awry
a leaky valve? Or a sneaky, unsportsmanlike guy?
The answer may come from the now-escaped gasses
which we need to recapture to make honest the passes.
Oh, where is the air that they took out of there?
Get looking! Let’s find it, don’t give up in despair.
Those little molecules that were loosed from the ball
let’s try to re-gather them – no matter how small.
Can the genie of air be put back in the bottle?
Let the fans know the truth – don’t diddle and dawdle.
Can all the air go back in the ball deep beneath the white laces?
Or will it stay near the field or travel to far outer spaces?
Neil DeGrasse calculated and then retracted a little
will the jury say “guilty” or end in acquittal?
The air knows the secret! It came out in a whoosh
which made it much easier to give the ball a deft squoosh.