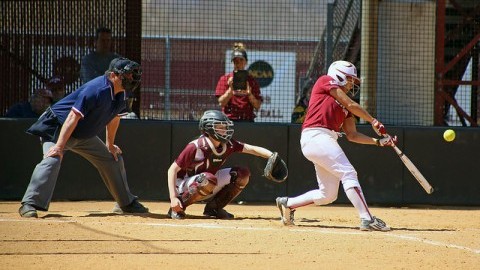 Four seasons, two head coaches, 176 games. The one constant presence for the Massachusetts softball team over this time? Quianna Diaz-Patterson.

Of all the statistics that showed Diaz-Patterson’s importance to the Minutewomen, consecutive games played is at the top of the list. Diaz-Patterson started in every game over her four-year career at UMass, which came to a close last weekend.

But for Diaz-Patterson, her dependability was all about helping out her teammates rather than keeping her streak of games played alive.

“I want to do whatever I can do for the team, whether it’s me on the bench if I have to or (to) be on the field,” Diaz-Patterson said. “I’m just fortunate I got to start on the field every time. I’m very grateful for that but I worked my tail off also to get onto the field.”

This work ethic was evident early on in her college career as Diaz-Patterson wasted no time before showing she was ready to contribute for the Minutewomen.

As a freshman in 2012, Diaz-Patterson, called ‘Q’ by her coaches and teammates, finished second on the team in batting average (.327) in 51 starts. Her 41 RBIs that year was good for second all-time by a UMass freshman.

Over her next two seasons, Diaz-Patterson improved on her freshman campaign, posting a .357 batting average in both 2013 and 2014.

But her most impressive hitting performance came this past year in her final season with the Minutewomen. Wrestling to stay over the .500 batting average mark all year long, Diaz-Patterson hit .504, placing her fourth in the nation and giving her the UMass and Atlantic 10 single season record.

“She’s gotten better every single year that she’s been here. Every year,” Stefanoni said. “She is definitely the example of when I bring recruits in and tell them, ‘We want you to leave here a better player than you came in.’ Q is the prime example of that happening.

“She really has gotten a lot better offensively and defensively since she’s been here and she couldn’t have hit her peak at a better time.”

Despite all the success Diaz-Patterson found in her senior season, she maintained that it stemmed from the work put in throughout her tenure at UMass.

“I try not to think about it,” she said. “It’s awesome, it’s very cool, but it just shows all the hard work I put in to get there. This meant a lot to me, to come in as an elite hitter and be the best that I could for this team.”

Diaz-Patterson leaves UMass as the third-best hitter in program history with a .381 career batting average. The shortstop also ranks third in on-base percentage (.467) and sixth in hits (212).

Diaz-Patterson’s impact for the Minutewomen went further than what was shown in the box score.

“On the field as a player, we knew if the ball was hit to her she’d get it or give it her all to get the out,” UMass pitcher Emma Mendoker said. “She just brought a lot of confidence to the team and she kind of brought the fun aspect to the game.

“We knew that we could rely on her. That’s why she was out (on the field) every single game.”

Mendoker has seen as much of Diaz-Patterson on a softball diamond as anyone. The two played on a travel team called the Polar Crush before teaming up at Amherst Regional High School and later UMass.

Stefanoni said Diaz-Patterson’s role as a team leader was “probably just as important as she (was) on the field, softball-wise.”

Mendoker recalled Diaz-Patterson’s ability to instill confidence in her teammates back when they were high school teammates.

“We went to the state championship senior year and it was really just a great time playing with her,” Mendoker said. “I never really felt the pressure on the field when I was pitching because whenever I looked back at her, she was always smiling and cheering and that really helped.”

Perhaps the most profound example of Diaz-Patterson’s team-first attitude was in what she said was her favorite game as a Minutewoman. She recalled a 17-inning win over Fordham her freshman year, marking the longest game in UMass softball history.

Diaz-Patterson didn’t remember the 2-1 victory for a great personal performance however – she went 1-for-7 and struck out four times. Instead, she fondly recalled it as a great team win.

For people who closely follow Amherst softball, the name Diaz-Patterson is nothing new. She spent her high school years playing just down the road at Amherst Regional where back then, according to her, the outcome of the game wasn’t as important as playing the game itself.

“I just remember having a lot of fun and honestly, back then I wasn’t thinking,” Diaz-Patterson said. “Just playing with my friends and just winning games. You know when you’re a kid, you’re just trying to do your best and play well.”

Despite going to high school in Amherst, her time at UMass didn’t have the homey feeling one might expect.

“It doesn’t feel any different I think than any other college kid,” Diaz-Patterson said. “My family actually moved away to Gardner my freshman year so I don’t actually have them right on my door every single day.”

The end of an era

With her final season in the books, Diaz-Patterson has a number of memories of clutch hits and impressive defensive displays over her 176 consecutive games. But what she’ll remember the most post-college will be the relationships she’s forged with her teammates and coaches.

“The people that I’ve gotten to play with, being on that field with them fighting, going through every possible situation. Tears, blood, laughter, happiness, everything,” Diaz-Patterson said. “This is my family and I wish I could never leave them. That’s what I’m going to miss the most, being with them.”

176 games later, Diaz-Patterson still wishes she could go out onto Sortino Field one more time.

“I try not to think about it because it might make me cry,” she said. “I’m not really ready for it to be done. They’re not kidding when they say four years go by really fast.”