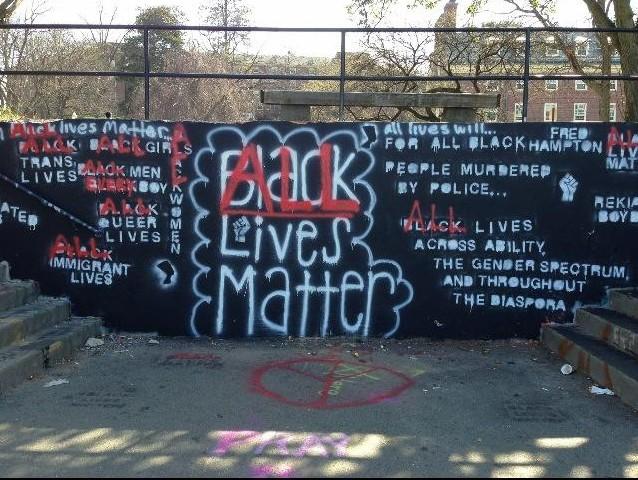 Last week, a graffiti message in Central that read “Black Lives Matter” was painted over with “All Lives Matter.”

And the ignorant comments from white individuals, which were just starting to die down over the riots in Baltimore, flared up once again on social media.

Let me make something clear: I am a white, middle-class woman from Westchester County. I had a pleasant childhood and throughout high school I grew up largely blind to institutional racism and discrimination around me.

Why? Because I am extremely privileged. It’s about time other white individuals understand that they are too.

Because of my background, I am choosing to focus on white individuals here. I can’t speak for the black community, or other cultures I am not affiliated with. I recognize that there is still a lot that I do not know, and that I have to keep learning.

But I give myself at least a small amount of credit for trying to learn, and I can’t stand continuously seeing white individuals completely disregarding or refusing to acknowledge their role in systems of oppression.

If you choose to educate yourself on white privilege – if you read essays like Peggy McIntosh’s “White Privilege: Unpacking the Invisible Knapsack”, easy visual explanations like Jamie Kapp’s “White Privilege, Explained in One Simple Comic” or even just Google “what is white privilege” – you will find undeniable evidence that there is political, social and economic bias towards the white race in our society.

What happened to the wall on campus, and much of the uproar that followed it, highlights not only this lack of knowledge, but also the tendency for white individuals to immediately get angry and defensive about the subject and their role in it.

By saying “black lives matter,” nobody is saying that every other race is insignificant. By saying white people are privileged, it doesn’t mean they cannot experience hardship and feel oppressed (although it is a different kind of oppression). One racist white person does not justify a statement that all white people are equally as racist.

People get so caught up in ways to defend themselves that they miss the point the group that originally wrote on the wall was trying to convey: yes, all lives matter, but right now there is enormous evidence which reflects the claim that black lives are regarded as less significant than white lives in our society.

The day after the incident, a top post on the app Yik Yak read, “I’m so sick of hearing about this stupid wall. Change it back to art and take your politics somewhere else.”

In the comments, someone asked the original poster if they were white, to which they responded, “yeah, but that has nothing to do with this.”

It has a lot to do with it. White privilege is the privilege to remain ignorant. It is a privilege to be bothered by the topic of racism not because you experience it first hand, but because it is clogging up your social media.

The intention of pointing out a person’s privilege is not to make that person feel guilty. White people did not ask to be born white. Being born white does not make you a bad person. But it is your responsibility to recognize the benefits that can come from the color of your skin, whether or not you reap them (another great article for those seeking more education on the subject: Explaining White Privilege to a Broke White Person by Gina Crosley-Corcoran).

By denying or refusing to acknowledge your privilege as a white person you perpetuate the problem by marginalizing the struggles that come from institutionalized racism.

Before we start throwing out defensive thoughts on “all lives matter,” we need to open our minds and educate ourselves. Look at the message that was originally written and learn about why it was there, why we are hearing that message time and time again, and why it is controversial. The Internet is full of information, and the more knowledge one can gain on the subject, the more we can move forward as a society without being slowed by misinforming backlash.