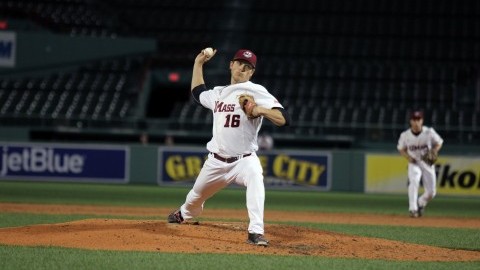 Senior Day was spoiled for the Massachusetts baseball team at Earl Lorden Field Sunday afternoon as the Minutemen dropped the rubber match of a three-game series against Rhode Island, 13-3.

UMass (14-25, 10-11 Atlantic 10) was dominated in all phases of the game. Starting pitcher Brandon Walsh fell to 1-4 on the season, lasting four innings and surrendering eight runs on nine hits. The Minutemen also made three errors in the field.

Walsh cruised until the fourth inning of a then-scoreless game until an offensive barrage from Rhode Island (22-20-1, 14-7 A-10) opened up an insurmountable lead. A two-run home run from Nick DeRegis and a three-run homer from Ryan Olmo plated five of the Rams’ seven runs in the inning and helped chase Walsh from the game.

A two-run homer from Matt O’Neil in the seventh inning and RBI singles from Mike Foley and Tim Caputo in the eighth helped stretch the lead to 12-2.

UMass struck for single runs in the fifth, sixth and eighth frames but failed to put together any big innings to match the Rams at the plate. Matt Bare and Paul Yanakopulos each drove in a run, while Kyle Adie’s solo home run in the eighth provided the final UMass run of the day.

It was Senior Day for five Minutemen as Adie, Yanakopulos, Andrew Grant, Conor LeBlanc and Adam Picard all played their final conference games in Amherst. The Minutemen have one home game remaining Tuesday against non-conference opponent Fairfield.

After taking the series opener 4-3 Friday against Rhode Island, UMass fell Saturday afternoon by an identical score after a late rally came up short. The series-opening split set the stage for the rubber match Sunday.

In Friday’s opener, sophomore Ryan Moloney pitched the Minutemen to victory with six innings of two-run ball while striking out three and walking two. He improved to 3-4 on the year.

Offensively, UMass was led by Picard, whose two-run blast in the bottom of the sixth inning broke a 2-2 tie and put the Minutemen ahead for good. Picard finished the game 1-for-3 at the plate.

UMass trailed 1-0 after the Rams struck quickly to start the game. Olmo doubled with one out and nobody on and the next batter Chris Hess promptly tripled to drive him home and give Rhode Island the first lead. The Minutemen wouldn’t respond until the fourth inning, when a Walsh RBI single tied the game 1-1.

Ben Panunzio relieved Moloney in the seventh and held the Rams to one run in two innings of work. Sophomore Mike Geannelis picked up his fourth save of the year after pitching a scoreless ninth.

In game two of the series, the Rams jumped out to a 3-0 lead behind the bats of Mike Sherburne and O’Neil, who each hit solo home runs. Meanwhile, Rhode Island starter Tyler Wilson was effective in seven innings on the mound, giving up two runs and striking out 11.

But an Adie double in the bottom of the fifth scored two runners and brought the score to 3-2. Dylan Morris tied the game with an RBI single in the eighth before the Minutemen surrendered the winning run in the top of the ninth when Mike Foley scored on a wild pitch.

Adie led off the bottom of the ninth with a single and Rob McLam walked to put runners on first and second with one out. But UMass stranded both runners as Taso Stathopoulos picked up his second save of the year for the Rams.

The Minutemen return to action Tuesday against the Stags. First pitch is set for 2 p.m. at Earl Lorden Field.