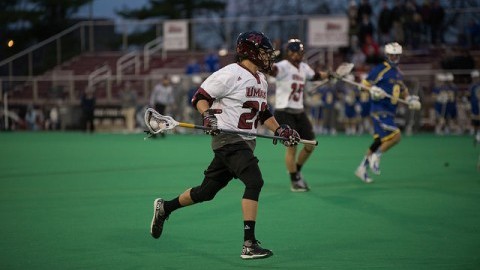 The Massachusetts men’s lacrosse team came within one goal of reaching this year’s NCAA tournament, but Justin Mabus’ tie-breaking goal in the final two minutes of last Saturday’s Colonial Athletic Association title game in a 9-8 Towson win stood in the way.

But despite its heartbreaking end to the season, that UMass was in a position to compete for the conference title after its difficult start to the season was an achievement in its own right.

UMass (4-11, 2-3 CAA) opened the season with five straight losses in a challenging stretch of nonconference games. Four of the five matchups came against nationally-ranked teams and included two one-goal losses.

These close defeats became somewhat of a theme for the Minutemen, who lost four regular season games by a single tally.

But UMass’ fortunes in tight-knit games changed heading into tournament play. After backing in as the No. 4 seed – following a 10-9 regular-season finale loss to Delaware – the Minutemen upset No. 1 seed Fairfield, 9-8, to earn a spot in the championship game.

According to UMass coach Greg Cannella, the semifinal victory was pivotal for the young team and he hopes it serves as a touchstone for future success in close situations.

“Hopefully that’s something our guys could remember and say, ‘Yeah we were able to win that one-goal game in a championship situation,’” Cannella said. “Hopefully that experience helps.”

Cannella said confidence was key in the Minutemen’s run to the finals, stemming from improved play in the second half of the regular season. UMass went 4-4 over its final eight games and battled the conference’s elite to tight games despite not playing at its top level, according to Cannella.

“In the conference we were very competitive,” Cannella said. “Going into (the tournament) the guys had a good feeling about it, it was a new season.”

Cannella added: “You hope the (nonconference) schedule helps you with the league schedule. I’m not sure if it did or not this year but I just think our guys just played better as the year went on and played with a little more fire and a little more urgency.”

Despite the postseason win, Cannella said he wasn’t satisfied with the overall result of the season and emphasized the necessity for a better start in 2016.

“There’s not the discouragement that we had to open the season, being a goal away from going to the NCAA tournament, which is what the goal should be every year. There’s disappointment but not discouragement,” Cannella said. “We should come back next year with a lot of energy to not allow that to happen again.”

Izzo, UMass’ 2015 co-captain, was an anchor as a defensive midfielder and added four goals this season. Sokol (17 goals) and Whiteway (15) were both major parts of the Minutemen’s offensive attack, ranking sixth and seventh respectively in team points.

“You’re not going to have a season when you don’t lose really good players and really good seniors,” Cannella said. “Our younger guys just have to step up. Our guys who were sophomores this year who underachieved have to be better and our freshmen this year who got some experience need to be better … They need to step up and hopefully they can check into certain roles.”

Among the returnees Cannella has high expectations for are freshmen defenders Mike Elcock and Luc Valenza and rising juniors Nick Mariano and Dylan Gruder.

Mariano entered the year coming off a team-leading 29-goal freshman season in 2014. While he led UMass in points again in 2015 (22 goals), the attacker failed to record a multi-goal game in any of his final seven games.

On defense, the Minutemen will return regular starters Kyle Karaska, Bob Fahey, Kevin Porzelt and goalie Zach Oliveri, who will all be seniors in 2016.

The defensive play often dictated UMass’ success in 2015. In the Minutemen’s best stretch of the season in early March – where they went on a three-game winning streak – the defense allowed an average of less than seven goals per game.

However, Cannella said the unit showed too many inconsistencies and must become more formidable for next season.

“We gave up (over 10) goals per game and that’s not very good,” Cannella said. “So you expect those guys to be better and they have to come back ready to be better.”