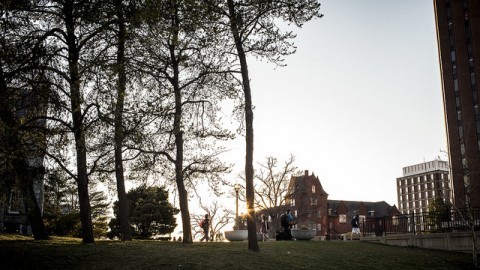 The University of Massachusetts Board of Trustees Committee on Administration and Finance recommended the system increase tuition and mandatory student fees for in-state undergraduates Wednesday, which would break a two-year stretch of tuition and fee freezes if approved.

The committee recommended that tuition and mandatory fees be raised five percent, and also approved increases to other mandatory fees in support of athletes, health services and student activities.

Additionally, the committee approved a motion to allow any of the UMass campuses to implement a $250 Information Technology student fee, which would be used for “technology infrastructure needs.”

The board will vote on these recommendations in a June 17 meeting in Amherst. If approved, these changes will go into effect for the upcoming Academic Calendar year.

“The decision to increase fees is not taken lightly and is never our first option,’’ said UMass President Robert Caret in a statement. “Given the current fiscal environment in the state and the structural deficit that the Commonwealth is having to address, it is important that we give students and their families enough time to plan accordingly.”

UMass spokesperson Ann Scales said that the tuition and mandatory curriculum fee increases would be dependent on the level of funding the University receives from the state legislature. According to a news release, UMass has requested $578.3 million, while the House and Senate have earmarked $518.9 million and $537.7 million for the five-campus system, respectively.

If the board approves the increase in tuition and all mandatory fees, in-state undergraduates on the Amherst campus would see the total cost rise from $13,258 last year to $14,171 next year.

Students Charlotte Kelly and Jeremy Tibbetts spoke to the committee on behalf of the Student Administration Accountability Coalition, opposing the rising cost of student fees and specifically objecting to the proposed IT fee. Although Scales said the board was receptive of the students and that “everyone was on the same page,” Kelly and Tibbetts expressed disappointment in the committee’s decision in a statement released by SAAC.

“Students can’t afford more fees, especially with the looming potential of an overall fee and tuition increase,” Tibbetts said in the release.

In the release the SAAC also proposed the board sets a $500 annual fee increase ceiling for students.

SAAC also stated that it plans to lobby the state legislature for more than the amount requested by UMass, in order to balance the IT fee and reduce the mandatory curriculum fee.

The proposed annual IT fee of up to $250 is aimed at supporting a growing campus network. The fee would be in addition to an existing $252 residential technology fee – paid only by undergraduates who live on campus – that funds some dated types of infrastructure and pays off the school’s infrastructure debt.