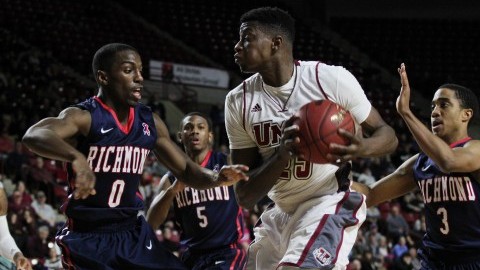 Cady Lalanne became the 16th player in Massachusetts basketball history to hear his name called in the NBA Draft after he was selected by the San Antonio Spurs with the 55th overall pick in Thursday’s second round.

Projected as a late second-round pick or viable undrafted free agent target, San Antonio made the call after Lalanne impressed in pre-draft workouts. Lalanne particularly improved his stock at the Portsmouth Invitational, where he earned a spot on the all-tournament team behind 13.3 points and 12.3 rebounds per game.

Lalanne was the Spurs’ second pick of the night following the team’s earlier selection of Serbian-born center Nikola Milutinov in the first round.

Lalanne’s selection ended a seven-year drought for UMass in the NBA Draft. The last Minuteman before Lalanne to be drafted was former center Stephane Lasme in 2007 by the Golden State Warriors.