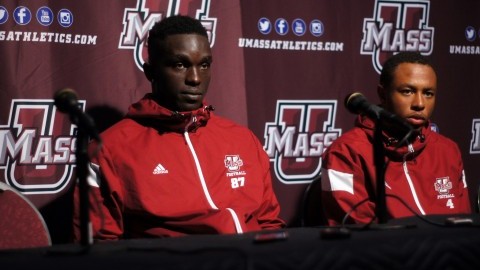 Sifrin, 27, joined Indianapolis as an undrafted free agent after being passed on at the 2015 NFL Draft on May 2. His release comes in week three of the Colts’ organized team activities.

The 6-foot-5, 245 pound Sifrin played in 11 games in his one season with the Minutemen in 2014, catching 42 passes for 642 yards and six touchdowns. Before UMass, Sifrin spent time at El Camino Junior College and ASA College in Brooklyn as a two-sport athlete in football and basketball.

Following his successful 2014 campaign, Sifrin elected to forgo his senior season and was considered a possible sleeper option in the later stages of the draft, drawing some comparisons to Seattle Seahawks All-Pro tight end Jimmy Graham, who also played under UMass coach Mark Whipple when the latter was an offensive coordinator at the University of Miami.

But Sifrin struggled at the NFL Draft Combine in April, running a subpar 4.84 40-yard dash. While he did improve his scores at UMass’ Pro Day – posting a 4.75 40-yard dash and finishing with 15 reps of 225 pounds in the bench press – his draft stock took a hit.

Sifrin’s replacement on the Colts’ roster, McGrath, has caught 26 passes and two touchdowns in three NFL seasons. After announcing his retirement prior to the 2014 season, McGrath was reinstated by the league this April.

Sifrin will now go through waivers before he becomes a free agent. If he goes unclaimed, he will be free to sign with any team.