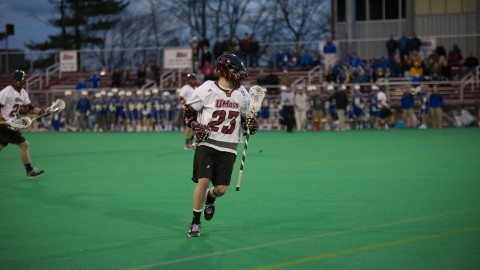 Two of the most significant players for the Massachusetts men’s lacrosse team will be transferring, the University confirmed on Wednesday.

Attacker Nick Mariano and goalie Zach Oliveri will be departing the program, with Oliveri heading to Stony Brook as a graduate student and Mariano most likely joining Syracuse University for his final two years of eligibility.

For the Minutemen, Mariano’s departure means the team will be losing its top goal scorer for each of its two past seasons. During this span, Mariano recorded a team-high 51 goals and earned the 2014 Colonial Athletic Association Rookie of the Year award.

Last season, Mariano was named to the All-CAA Second Team and NEILA All-New England Second Team behind 22 goals and 20 assists.

If the reports are true, Mariano will head to the No. 1 ranked team at the end of the 2015 regular season in the Orange, who were upset by John Hopkins in the NCAA Tournament. He is expected to provide a boost to Syracuse’s offense, which loses five of its six top-scorers from last year.

“We are disappointed that Zach and Nick are transferring out of the University of Massachusetts, but we wish both of them well,” Minutemen coach Greg Cannella said in a statement to MassLive. “We will miss them both and we hope for nothing but the best for both of them at their next schools and going forward after college.”

Oliveri played in 15 games this past season as a redshirt junior, making 139 saves and almost leading UMass to a CAA championship and automatic bid to the NCAA tournament after an inconsistent start to the season. Next in line to lead the Minutemen in net is D.J. Smith, who saw action in four games last year as a sophomore.