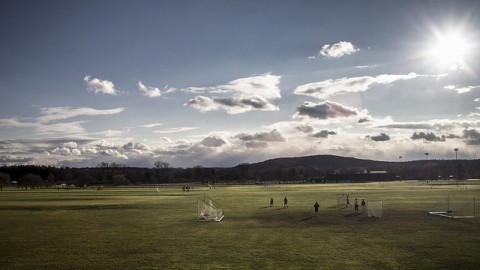 As August approaches each year, I can’t help but reminisce about returning to the classroom as I did for 21 years of my life as a student, and essentially do now as a student affairs professional. This year was special because not only was I preparing to return to my real life job at Boston University, but because I had the pleasure of returning to the place I called home for four impactful years at the University of Massachusetts.

The new Commonwealth Honors College housing area gleamed magnificently and the construction of a new basketball facility next to the Mullins Center and a new science center ignited my imagination like a spark plug. I was amazed at the progress this place had made in just three years since I walked its streets and hallways.

The reason for my visit was a bit different this time – no meeting up with old college buddies, no visiting old dive bars or eateries, but rather spending an afternoon with more than 50 amazing LGBTQ youth from around the state of Massachusetts.

More than 50 LGBTQ youth and 15 gay men played, goofed, bonded, chatted and laughed; we fumbled over proper pronoun usage, devoured crisp watermelon amidst the August humidity and allowed our true selves to shine.

The 15 men from the FLAG Flag Football league in Boston made their fifth annual appearance at the Massachusetts LGBTQ Youth Summit at UMass the weekend of August 14-16. FLAG stands for Friends of Lesbians and Gays, an organization that I have been a player and Board of Directors member with for two years. The nonprofit’s mission is to tackle stereotypes and build community through sport for the LGBTQ and allied community.

Without a doubt, FLAG Flag Football changed my life when I moved to Boston in 2012, by illustrating that being gay and being an athlete isn’t a contradiction but rather a harmonious unification.

However, this day wasn’t about just me or my FLAG friends, but rather these incredible high school-aged young warriors. They didn’t exemplify the stereotypical depiction of a warrior, but in every sense they were: fighters, motivators, martyrs and lovers. These individuals are the crème of the crop among the leaders of Gay Straight Alliances across the state of Massachusetts – making waves in their schools by shattering boundaries and instituting diversity and inclusion.

Conference Director Jeff Perrotti shared with the FLAG men summaries regarding the in-depth discussion, community building and teamwork that the youth had immersed themselves in all throughout the weekend. In his words, our job was to “let them play.” Play we did – first with fun games like Card Ninja Warrior” and “Junk in Your Trunk”, all aimed at letting these adolescents be kids. The day ended with us teaching them the game we love: flag football.

Something was so different for me this time when I visited the scenic pastures of Amherst – I was me, a different me than I had been just three years ago when I graduated. Not only had it taken me more than three years to come out of the proverbial closet while an undergraduate, but seemingly another three to embrace that being gay was so many things, and most of all just me.

The clash of the former and the present was so emotional in my heart and mind. Throughout the day I relived the painful moments I had experienced as a suppressed undergraduate. Conversely, being around my new FLAG friends made me also reveled in the glory of how much joy life had brought to me since moving to Boston.

The day was truly bittersweet. As I walked from outside Boyden Gymnasium onto the Mullins Center fields, I literally and figuratively re-walked the steps that I had taken so many times before during my four years at UMass. It was different, I was different.

I left the day feeling overwhelmingly fulfilled, like after eating a delicious hot fudge sundae. No time machine existed to take me back to my freshman year, but as I thought back during my trek home, what struck me was how my life could have been different and how high school students like these could have helped.

I realized that it wasn’t the Stonewall Centers of the world, the amazing Laverne Cox-esque speakers or even the recent marriage laws passed by SCOTUS that were inspiring change. It was these kids – the ones who get mocked, made fun of and bullied each and every day in what every American can probably admit is the most challenging social utopia of your life – high school, that were making this world a better place for everyone.

We need more of them – students who never stop learning and are proud in all respects. It’s one thing for me, a white cisgender middle class male to talk about how great my life is in liberal Boston playing in a flag football league with men who look, act and are nearly identical to myself. It’s something totally different for gender non-conforming kids – of which nearly 53 percent have been physically harassed because of their gender expression, and 55 percent because of their sexual orientation, compared to their cisgender, heterosexual counterparts – to show up smiling, with a heart of gold and shield of love on their faces and chests each and every day.

It may sound cliché to say they are the true heroes, but it is 100 percent accurate. If even half of the people I was surrounded by when I was a student at UMass were as quirky, unique and exceptional as these youth were, I know I could have lived my truth earlier in life and never struggled through 21 years of suppression, anguish and pain.

Forget the faces you see on TV or read about in the news – take a day and spend it with a youngster who isn’t mainstream, isn’t what you’d expect and lives outside of your comfort zone. I can assure you you’ll be surprised by what you see, and proud that you took the chance.

Ethan Sobel is a 2012 graduate of UMass, specifically from the Isenberg School of Management.