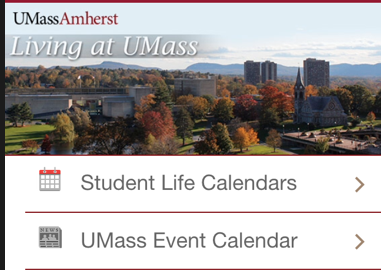 A screenshot of the apps homepage

Long lines of cars, closed roads and detour signs can make navigating the University of Massachusetts campus difficult during move-in – especially for freshmen moving into the dorms for the first time.

Lacey Olson, interim assistant to the director of Student Services at Residential Life, said last year the organization handed out maps to families with directions for how to get from check-in locations to residence halls. Still, she said, families either got lost or disregarded the maps completely.

“People are just not used to looking at a paper map anymore,” Olson said. “We were trying to think about how we could get (students) the maps.”

Recently, the University unveiled a 21st century solution to the long-standing problem.

In order to connect to students more directly, the staff developed a “Living at UMass” mobile app, which is aimed at helping the roughly 13,000 undergraduates that will move into campus this fall.

Olson said the app, which is free and available for both Apple and Android products, was designed specifically for UMass by the vendor Modo Labs. She said the module allowed Residential Life to build its own maps in Google Maps and incorporate them into the app.

Students can click on a location-finder button in the “Living at UMass” app, which is similar to what is already in Google Maps, and track their location as they move around campus.

“(Students) can actually see themselves moving on the map,” Olson said. “So they actually know they’re on the right track and actually headed to the residence hall.”

Two full-time staff members, including Olson, and a student staff member in Residential Life implemented the project. The annual subscription cost for the app is $7,500 per year, and there was also a one-time configuration cost fee of $7,500 for this year, according to Olson. She said those funds came from Residential Life Technology Services.

The app also includes planning steps for students in the days leading up to move-in, information about student IDs, room keys and move-in reservation times, as well as interactive video tips, according to a UMass press release.

Currently, the app is mainly focused on move-in weekend. But Olson said there are plans to turn the app into a more “collaborative” effort between organizations on campus, with the goal of keeping the app useful and updated throughout the year.

“After we make it through move-in, the app doesn’t stay useful,” Olson said. “So we’re going to take that stuff out and bring in all the current things happening on campus.”

Olson said Residential Life will turn areas of the app’s content over to Student Affairs and Campus Life as the school year progresses. She said there are plans to include a Student Life calendar, a UMass event calendar and information about events on campus within the first week of school, among other ideas.

“Students aren’t going to have to go very far to figure out how to get involved or what to participate in on-campus,” Olson said. “It will all be right there.”

She also said there’s a social media component within the app, which constantly filters students posts in if they use the hash tag #UMassMoveIn or tag “Living At UMass” on Twitter and Instagram.

Olson, who helped develop most of this content, said she’s excited about the idea of connecting to students and families more directly as they move back to campus.

“We’re really trying to connect with students on social media, because we know that’s really how they’re connecting with each other,” she said.