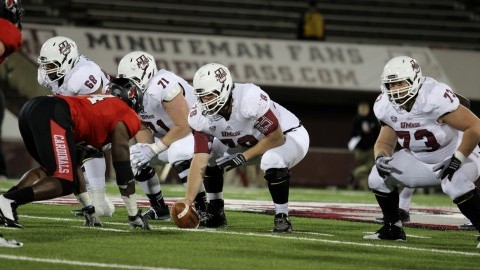 With so many moving parts across the landscape of Division I football each year, it’s not too often a team enters a season with five returning starters on its offensive line. However, this unique continuity is something the Massachusetts football team hopes will benefit its offense in 2015.

“All the guys, we’ve been around together and the chemistry is there,” UMass left tackle Tyrell Smith said following Thursday’s practice. “I think it’s going to be a great year for the offensive line.”

Smith, a redshirt junior, should be joined in the Minutemen’s starting lineup by senior center Matt Sparks, redshirt junior Michael Boland and juniors Fabian Hoeller and Elijah Wilkinson. Smith, Hoeller and Wilkinson started all 12 games last year, while Sparks made 10 starts – he missed two due to injury – and Boland had six.

Now with a full year under their belts in coach Mark Whipple’s offensive system, Smith said this season is when the unit can take off in terms of consistency for a UMass offense that posted 27.3 points per game in 2014.

“I would say for us as an offensive line, last year was technically our learning year. We learned the offense, we got it a little bit, we did pretty good at it but we could’ve been better,” Smith said. “This year, we know the offense and now we’re just critiquing it.”

According to Whipple, the offensive line has already made notable strides in both confidence and physicality since the end of last season.

“I think they’ve all taken it upon themselves to get better,” Whipple said. “They’re a more confident group certainly then when we went into (Boston College) last year. They’ve grown a lot from experience and have worked hard.”

Whipple added: “I think we’re a little bit more physical as a team on both sides of the ball and they have a lot to do with it.”

With this combination of confidence and shared experience working together on the line, Sparks said communication in terms of protection calls has been more fluid and has led to a greater level of trust.

“Everybody’s making calls now. I don’t have to tell them what to do, they’re telling me what to do and it’s great,” Sparks said. “We’re just all comfortable with each other and know what everyone’s going to do on every play.”

One player who’s benefitted perhaps the most from this growing chemistry is starting quarterback Blake Frohnapfel. Before missing the final two games of 2014 with a right leg injury, Frohnapfel thrived in the Minutemen’s offense, passing for 3,345 yards and 23 touchdowns.

“When you have that deep of a group, and some of those guys are still pretty young, it definitely makes my life easier,” Frohnapfel said after Monday’s practice. “They know what they’re doing when it comes to making protection calls. I don’t have to worry about anything now.”

According to Smith, this trust between a quarterback and his offensive line is critical. He added that Frohnapfel has a great personality, unquestioned leadership and skillset that makes he and his fellow linemen’s jobs easier.

However, this doesn’t mean the two don’t trash talk to each other on the field.

“He talks junk to me, I talk junk to him,” Smith said. “He tells me he can block better than me, I tell him I can pass better than him. It’s a fun relationship and I think it’s great to have that quarterback and offensive line connection.”

One area in particular where Smith believes the offensive line can improve in this year is run blocking. While UMass boasted the No. 1 passing offense within the Mid-American Conference last season, the Minutemen averaged only 109.3 yards per game on the ground, ranking them ninth in the conference.