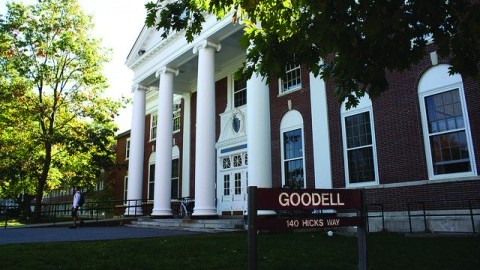 For most students at the University of Massachusetts, deciding on what major to pursue is an ongoing process. With over 90 major subject areas offered at the University, this process can be overwhelming and many students in previous years have opted to explore their interests by going in as undeclared students.

To better advise current and incoming students in selecting majors based on their interests, the University recently implemented a new advising model that replaces the undeclared major.

Starting with the class of 2019, the new model offers incoming students the option to either instantly declare a major or explore their interests in Exploratory Tracks affiliated with the University’s eight schools and colleges.

This change, according to Pamela Marsh­-Williams, Assistant Provost and Dean of Undergraduate Advising and Learning Communities, is a step towards achieving the University’s longtime goal of providing advising support to all students.

“The Provost has the vision for insuring that students can have advising support, and this is not a new idea, this is one that we planned and hoped for many years ago,” said Marsh-­Williams,

“We couldn’t achieve (this vision) before for a variety of reasons. One is when you think about one in four first year students coming in as undeclared, (before) we were not able to differentiate between a student who was very undecided and a student who was very clear about the major he or she wanted and who was really striving to get into a selective major such as Engineering or Isenberg,” Marsh-Williams said.

“To have all of them, about 1200 students, in a general central advising unit, it was somewhat challenging to provide more personal, individualized service to all of them.”

Prior to the new model, the Undergraduate Advising office had offered undeclared students more individualized support through OASIS, a first year seminar that students could elect to take to explore academic options with advisors.

“I feel that the OASIS class was the most helpful part of being undeclared, but not so much in finding a major”, said Kate Brunges, sophomore and current undeclared student, “It really helped with general tips like staying on track in school and how to get involved in extracurricular activities.”

In addition to its lack of focused support on majors, OASIS’s inability to be accessible to all students, said Marsh-­Williams, was another reason for the university to develop a new model.

“About half of the first year students who came in as undeclared could do OASIS,” said Marsh-­Williams. “So first we had a large group of students who we couldn’t easily discern where their interests lie, and second we couldn’t offer OASIS to every student that wanted or could have benefited from it. The change in the model for advising is designed to insure first and foremost that all incoming students will have a collegiate home.”

Steps towards changing the model first took place early last semester when the university sent out letters to incoming students and returning undeclared students to explain their options within the new advising structure. According to Marsh-­Williams, these letters informed first year students that in addition to taking a required first year advising seminar, they could either enter declaring a major or enroll in an Exploratory Track that best fit their interests.

“With the Exploratory Tracks now,” said Marsh­Williams, “Eight (of the tracks) have students enrolling or being affiliated with a school or college and every school or college now has a central advising office structure focus that supports students who are exploring their options.”

“(The structure) also supports first year students who come in with a clear choice of major but at some point decide that they’re not so sure about that.”

In addition to the Exploratory Tracks, the new advising model has reassigned former UA professional and graduate student advisors to the schools and colleges to act as central advisors for all students. This change, said Marsh­Williams, provides much needed guidance on other majors and subjects of interest to undecided students and declared students considering switching majors.

“Although students who come in declaring a major are very often changing their minds about whether to add a major, drop a major, add a minor, or do a certificate, the colleges have tended to focus (their advising) on what their major is because the student is assigned to a department,” said Marsh­-Williams.

“So when they go see their Math advis0r, or their Physics advisor, or their English advisor, those advisors are equipped primarily to focus on the major and not alternatives. Before, students wishing to explore alternate majors would come here to Goodell, but now the colleges have a central advising resource within those colleges to help students.”

“The colleges are getting what I believe are the best advisors that the university has had, so we know that the students are benefiting by having them in the schools and colleges.”

While the new model provides central advising at the schools and colleges for incoming and returning declared students, returning undeclared students will still receive guidance from the Undergraduate Office in Goodell until May 2016, at which point they must declare a major.

“Advising for these students is now being given by our advanced doctoral students who were part of our advising team before,” said Marsh-­Williams, “Our goal is to help all 800 returning students find and declare their appropriate academic major and enroll in schools and colleges by the end of this year.”

Sam Walters, a sophomore in the process of declaring a major, was surprised to learn of the university’s decision to remove the undeclared major, but felt the change was wise given his experiences.

“Though I’m surprised they got rid of the option to be undeclared, I think it’s actually a good idea,” said Walters,

“You constantly hear people tell you that you have time to declare your major, but even after one or two semesters, your options become fairly limited. It’s best to pick a few ideas for a major and choose classes that fulfill requirements for those. I mostly took Gen Eds my first two semesters, which I regret because some of them could’ve been fulfilled in whichever major I end choosing.”

Brunges similarly considered the new model to be beneficial for students, adding that “while I liked having the option to explore and take classes in all the subjects that interested me without being tied to a specific major, I can see why things are changing. (The new model) might make it easier for students to refine their interests and assist them in finding a major.”

“Having the advising that’s available to students across campus means that every student has a better opportunity to combine their advising within the unit where they’re enrolling,” said Marsh­-Williams, “It is by no means a perfect model, but it is hitting on some of those areas that we are striving to achieve as a campus.”

Elizabeth Kane can be contacted at [email protected]