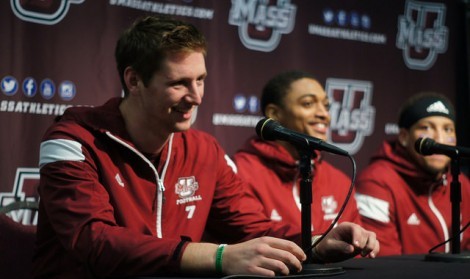 Those are just a select few of a laundry list of legends that have roamed the sidelines in historic South Bend, Indiana at the University of Notre Dame.

On Saturday, the Massachusetts football team will have its turn to take the field with one of the most iconic programs in college football history.

UMass (0-2) will have its hands full against No. 6 Notre Dame (3-0) as the Fighting Irish are the highest-ranked opponent the Minutemen have played in program history.

Although both players and coaches are treating this weekend as any other road game, center Matt Sparks realizes how unique of an opportunity the trip to Notre Dame is as a fan of the game of football.

“It’s hard not to get caught up in that,” Sparks said. “Just being a fan of (college football), you have to remember that you’re there to win.”

“You have to treat this like it’s a business trip and approach it the same way,” UMass quarterback Blake Frohnapfel said. “Then again, this is a pretty good experience and not many people have a chance to do that, so I want to enjoy it as much as I can.”

UMass is no stranger to playing in hostile environments against perennial college football powerhouses. Since joining the Football Bowl Subdivision, the Minutemen have traveled to “The Big House” at Michigan Stadium, Wisconsin’s Camp Randall Stadium and Penn State’s Beaver Stadium. Michigan (No. 1) and Penn State (No. 2) have the two largest venues in college football.

UMass coach Mark Whipple said the offense has been working on silent snap counts this week at practice to help deal with the crowd factor.

The Minutemen are using last year’s trip to University Park, Pennsylvania as a reference point to handle the aurora of playing on the road against the Fighting Irish.

“A lot of the guys playing against Notre Dame played (against Penn State) so there’s not going to be a lot that’s new or a surprise. It’s just exciting to play in that kind of atmosphere,” Sparks said.

Frohnapfel agreed with Sparks, saying the preparation has been same week in and week out regardless of the opponent.

“We have to do it the same way no matter who we are playing, whether it’s Penn State or Notre Dame, no matter who it is,” Frohnapfel said. “You can’t change the routine and everything is the same really.”

With a total of 15 seniors that are starters, Whipple said bringing an experienced, veteran group makes the trip that much easier.

“Yeah, no question (it makes it easier),” Whipple said. “That doesn’t mean you are going to win or play better. It may help you a little bit, you may be able to be a little more open to some things and try some things because of leadership. Communication is a big thing whenever you go on the road.”

Although there aren’t any high expectations for UMass, Frohnapfel believes playing Notre Dame is a good measuring stick to see where the Minutemen really are, especially coming off of a 25-23 collapse against Temple last weekend at Gillette Stadium.

“For UMass coming up from FCS to FBS the past couple years, playing Notre Dame is playing the top of the top,” Frohnapfel said. “After playing Temple, a borderline top-25 team last week, and seeing we went toe-to-toe with them for 12 rounds… It’s kind of a measuring stick for yourselves, if we can compete with these teams it gives you confidence in what you’re doing and to the program as well.”