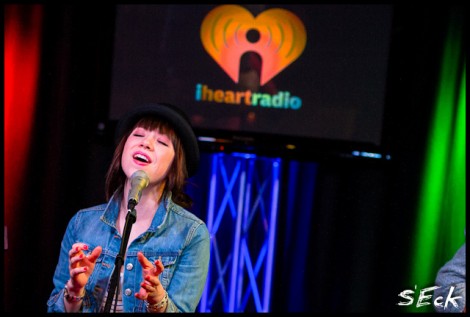 Though I never thought that the artist who would do this would be Carly Rae Jepsen, at some point between all of the guitar-based rock records I have been underwhelmed by in the last year and a half, it was the Canadian pop sensation that took a 2-ton wrecking ball to my internalized prejudice against pop.

Another factor, of course, was the astonishment I felt when I first heard “Run Away With Me,” the incredible opener of Jepsen’s third album, “E.MO.TION.” Like its equally dazzling video, “Run Away With Me” grabs you by the collar and takes you on a whirlwind tour of your most epic dreams.

With a blaring saxophone, a chorus that absolutely flattens all resistance on every listen, and Jepsen’s exuberant “hey!”s, “Run Away With Me” is ear candy of the most exquisite, irresistible type. It is an explosive slice of escapism in the purest sense, with Jepsen’s calls to “run away with me!” sounding as large as the seemingly infinite sax riff that flanks them from behind.

It helps, after that staggering rush of a song that Jepsen is up front about her intentions for the listener on the title track. “In your fantasy, dream about me/And all that we could do with this emotion,” she belts out over a stuttering, distinctly Phoenix-like instrumental.

“I Really Like You,” with its instant-viral-sensation, Tom Hanks-starring music video, is the obvious spiritual sequel to her world-conquering 2012 hit, “Call Me Maybe.” Like its smash predecessor, its selling point is the ridiculously hooky chorus, featuring the simplest of exhortations from Jepsen. As the album’s most streamlined moment and biggest sugar rush in album full of them, the craftsmanship gets lost a little.

But there is a reason, other than Tom Hanks, that this track has become another blockbuster for Jepsen. Though she is perhaps at her least ambitious on this song, she is also at her most comfortable; melting you without the slightest exertion with the song’s wink of a chorus.

And yet even “Run Away With Me” doesn’t quite live up to the initially unassuming “Gimme Love,” which is sandwiched between two of the album’s bigger singles. The most 80′s of tracks on a record that may as well have been copyrighted in 1985, it features Jepsen’s most nuanced performance on the record.

She soars above the slowly building beat in the verses, then slots herself perfectly under the song’s titanic synths in the criminally catchy chorus. With the momentum of “Gimme Love,” the mighty ballad “All That” cruises by with equal confidence. Though the ghost of Prince hangs over the percussion, funk bass line and glossy keyboards, Jepsen controls the song completely.

“Show me if you want me/if I’m all that/I will be there, I will be your friend” she pleads, making this desired expression sound like the most important matter in the world, while stopping just shy of histrionics.

After such a breathtaking initial run, “E.MO.TION,” released Aug. 21, perhaps inevitably slows from a dead sprint to a more human-like run in its second half. But the confident playfulness of “LA Hallucinations,” the odd, pitch-shifted delight of the Rostam Batmanglij-produced “Warm Blood” and the final, triumphant stand of “When I Needed You” gives the album one last, surprisingly varied, burst to the finish.

It is more than enough to show Jepsen’s versatility and the impressive flexibility of this record. It’s also the perfect bookend to an album that can coat anything from desire to exasperation in an air of pure and total joy. There’s no irony, no concern for the opinions of others.

There’s just Carly Rae Jepsen, and her invitation for you to join her in her wonderful, neon-coated metropolis of perfect 80′s pop. And I’m more sold and captivated by it than I have been by any record that I have heard in awhile.