Chiusano: Bowl invitation still a ways away for UMass football 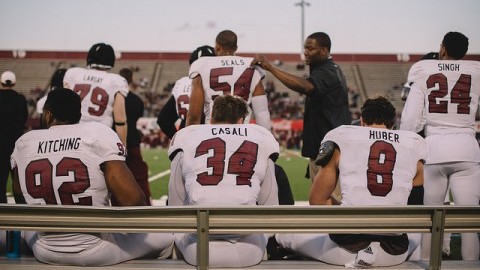 The 2015 season is a pivotal year for the Massachusetts football team.

With life as an independent just around the corner and the trials that await UMass in its 2016 schedule (which features four Southeastern Conference opponents), it appears the upcoming season presents a temporary window of opportunity for the Minutemen to reach a place they haven’t yet found in their four-year tenure in the Football Bowl Subdivision: bowl eligibility.

The internal expectations are there. UMass returns a significant number of contributors on both sides of the ball, and looks primed to maintain last year’s prolific offensive numbers.

Senior linebacker Jovan Santos-Knox, one of the most vocal leaders among the Minutemen, discussed these expectations with the media on day one of UMass’ fall camp. After representing UMass at the Mid-American Conference’s official media day in late July – hosted at Ford Field, home of the upcoming MAC championship game – Santos-Knox said returning to the spacious stadium and beyond at the end of the regular season is the team’s main goal.

“We want to be back in Detroit and to a bowl game,” Santos-Knox said. “Everyone has the same mindset, there’s no doubt in anyone’s mind. I think everyone’s going to keep rolling.”

But this won’t be the year the Minutemen take that next step.

UMass needs six wins this season to become eligible for its first bowl in program history. Keep in mind that eligibility doesn’t always translate to an invitation in the MAC, which only has five definite slots come bowl season.

The Minutemen have a definitive answer at quarterback for the first time in the program’s FBS era in Blake Frohnapfel, and the team appears to be taking major strides under the leadership of coach Mark Whipple in the second year of his second stint with the program. But too many questions remain entering this season.

These question marks start with the biggest and most general of them all: UMass showed it has the capability to take control of a game early, but can the Minutemen close it out?

“Finishing” has been a common catchword for UMass following a 2014 season that saw 12 points as the difference between a respectable seven-win season and its actual, less-satisfying 3-9 record.

Although UMass doesn’t face quite the same lineup of Atlantic Coast Conference, Pac-12, SEC and Big 10 conference opponents that it faced to open the 2014 campaign, this year’s nonconference schedule doesn’t provide any “easy wins” by any means either.

The Minutemen start off this Saturday with a rematch against Colorado, a team that overcame an 11-point second half deficit in last year’s matchup at Gillette Stadium. It’s fitting that this will be UMass’ first chance to prove it can indeed “finish.”

The path toward a bowl doesn’t get any easier the following week, which slots the Minutemen against Temple, which proved its capability in a 27-10 upset victory over Penn State in week one. From there, it’s onto South Bend to face No. 9 Notre Dame.

Add in UMass’ final nonconference opponent, Florida International (who opened the season by upsetting Central Florida), and the Minutemen will be tested early and often to see if they can piece together a full 60 minutes of competitive football before entering always-unpredictable conference play.

Within this major question comes additional unsolved mysteries on offense and defense.

With Jean Sifrin’s irreplaceable mix of size and athleticism gone, who will emerge as a reliable No. 2 option for Frohnapfel behind Tajae Sharpe?

Can UMass translate running back depth into a consistent ground game and a more balanced offense?

With the addition of UAB transfer Kelton Brackett, can the Minutemen’s defensive secondary limit the amount of big plays given up and get the defense off the field?

It may sound like a cop-out, but the only way to answer these questions will be over time.

However, it won’t take long over the opening weeks to at least develop an inkling of what will play out.

By no means is UMass a far cry from the untested waters of bowl invitations. But with a flurry of questions surrounding the team as the 2015 season opens, the Minutemen’s true path remains unclear.