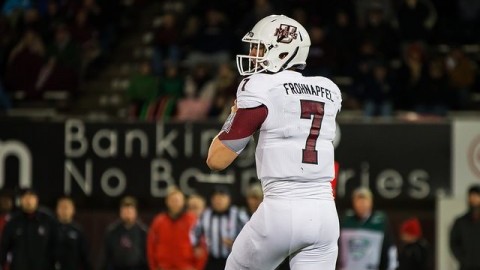 A few years ago the Massachusetts football team ran a cheesy promotional video behind the beat of a song call “All In” to hype up fans for the 2013 season.

Like a card player at a poker table, Whipple knows this is his best shot in the foreseeable future for UMass to make it to a bowl game and potentially a trip to a conference championship game.

Simply put, anything short of a trip to a bowl game will be a failure of a season for the Minutemen.

With the talent Whipple has, returning to a .500 record is without question a realistic possibility. Not to mention the Mid-American Conference is the second weakest conference in the country, only behind the Sun Belt Conference.

The 2015 season will march to the beat of quarterback Blake Frohnapfel’s drum. Frohnapfel was a top-five passer – statistically speaking – in the country last season before missing the final two games with a lower body injury. Once Frohnapfel went down, everyone saw how bad UMass was. It suffered two u-g-l-y losses against Akron and Buffalo in which it was outscored 71-26 in those games.

Barring any injuries, Frohnapfel and wide receiver Tajae Sharpe will have numbers near the top of the conference amongst their respected position. Sharpe was amongst the nations leading receivers last season, finishing 10th in the country with 1,281 receiving yards. Only Western Michigan’s Corey Davis (1,408) had more receiving yards than Sharpe.

Add football’s version of a utility player in Rodney Mills to the mix, and Whipple’s offense has potential to be tops in the conference. Although he’s listed as a fullback on the roster, Mills has the ability to lineup in the backfield as well as both an inside and outside receiver in the passing game.

We all know that the offense can and will score points in bunches, now the focus switches over to the defense.

Linebacker Jovan Santos-Knox and cornerback Randall Jette headline the Minutemen defense as both were selected to the preseason All-MAC first team. After finishing his first two seasons with 32 total tackles each year, Santos-Knox thrived in Whipple’s 3-4 scheme, ending the year with 143 tackles, good for fifth in the country. Jette led UMass with four interceptions last season.

But with nine starters on defense returning, the focus shifts from who will be on the field to where they will lineup. Trey Seals and Kessan Messiah will both see snaps as a standup linebacker and as a defensive end in three-point stances. Former defensive backs Joe Colton and Zeke Edmonds will get reps at outside linebacker, depending on the different defensive packages.

Aside from Notre Dame, every other opponent on the Minutemen’s schedule has potential to be a winnable game. Colorado, Temple and Florida International are nothing special and UMass will compete in all of those games, regardless of what the Vegas lines say.

Also don’t forget that the MAC schedule, is still, well, the MAC. Anything can happen there.

So for the Minutemen, there’s no time like the the present. With multiple games against the Southeastern Conference and a talented senior class soon departing, if 2015 isn’t the year for a bowl game, I don’t know when that time will come.

Let’s just hope this season doesn’t come down to the kicking game.