Cyr: With its backs against the wall, Saturday is a must win for UMass football 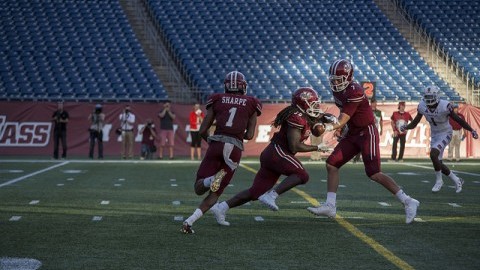 The Minutemen hope to jump-start their season against Florida International

At the start of the season, all the talk around the Massachusetts football team was about its dreams – and legitimate shot – at making it to a bowl game.

Now sitting at 0-3 following a pair of blowout losses against Colorado and Notre Dame, and a devastating fourth quarter collapse against Temple, UMass’ hopes and aspirations of making it to a bowl game are slowly fading right before its eyes.

Sure, there have been ups and downs to the season thus far, but regardless of how well or how poorly the Minutemen have played during those stretches, there is still a giant goose egg in their win column, and with conference play right around the corner, they find themselves with their backs pinned tightly against the wall.

There’s no sugar coating it­ – Saturday’s game against Florida International is a must win for UMass.

Ideally the best situation for the Minutemen to make a bowl game without running the table in the MAC, would have been to split its non-conference games heading 2-2 into their conference-opener against Bowling Green. Instead, with already three losses, UMass cannot afford to lose more than three games the rest of the way out if it wants to remain eligible for a bowl game.

As much as Saturday’s game will affect the Minutemen’s destiny on the field, this the best opportunity they have to grab the local, public interest. Even though it was a lopsided loss against the Fighting Irish, the fact that UMass was competitive for most of the first half on national television was good for the program’s exposure.

With this upcoming Saturday being the first game on campus at McGuirk Stadium –although the tailgate will still be the main event – and the added buzz of Family Weekend, there’s no better shot for the Minutemen to gain support from the casual fan. The crazies and diehards have been loyal through these horrible times, but it’s time the average student on campus starts caring about the football team, and that can start with a win on Saturday.

Saturday’s game falls during Family Weekend, which means that parents, brothers, sisters, cousins and grandparents will be traveling from across the country to visit their loved ones on campus. It’s a safe bet the football game will be the main event of the weekend for many families visiting.

Maybe it will start to feel like a real football atmosphere.

Around the country at schools in the Southeastern Conference or Big Ten, football games include fans of all ages coming together to support their team.

At schools like Alabama or Ohio State, football games don’t seem like a chore. They are fun.

Who knows – maybe with the surplus of people in town this weekend, the stadium will still be more than 50-percent full by halftime.

But in the end, it all starts and ends with how UMass plays against the Panthers.

If the Minutemen get a win, maybe more people will start to tune in to see if this team really has a shot at making a bowl game. A loss, and well, you can’t blame people for losing interest in a winless team.

Can you imagine the uproar if this team starts the year 0-4? Talk about disappointment and failure.

UMass dug themselves into this hole, and it’s not going to be easy to climb out of it. They know that the only way out is a win against Florida International.

Do they have what it takes, or will the hole start caving in deeper?

We’ll see for ourselves on Saturday.