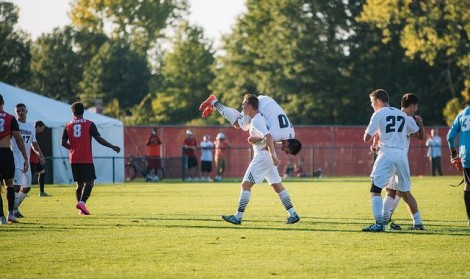 Josh Jess carries Will Ellis after the win against Hartford. Photo by Judith Gibson-Okunieff

With a plethora of underclassmen on this year’s roster, the Massachusetts men’s soccer team has looked toward its young guys to make contributions whenever they can.

Wednesday afternoon, the Minutemen (1-6) won their first game of the season over Hartford 2-1, and they have freshmen Kevin Boino and Samuel Asamoah to thank.

UMass coach Fran O’Leary, who recorded his first victory as the leader of the Minutemen, said he was proud of the way his team played, especially its younger players.

“Two young lads scored fantastic goals, which were backed up by very good assist plays,” O’Leary said. “We’ve been creating chances, we could’ve been up two in the first three minutes and the game would’ve been different.”

In the Minutemen’s victory Wednesday, O’Leary seemed to make all the right moves. In the first half, he substituted Asamoah in for senior captain Will Ellis with just over nine minutes to play and trailing 1-0. One minute, 43 seconds later, Asamoah converted for the Minutemen, heading in an Alex DeSantis cross to knot the game at 1-1.

After starting Boino but leaving him on the bench to start the second half, O’Leary then inserted the freshman back into the game with 29 minutes left. With 27 minutes, 10 seconds left and the score tied 1-1, UMass sophomore Zach Samson crossed a ball into the box, finding Boino who one-timed it past Hawks (1-3-2) goalie David MacKinnon for his first goal as a Minuteman.

“I knew (Samson) was gonna beat his man down the line and he had nowhere else to put it besides back in the middle,” Boino said. “I was at the right place at the right time and just tucked it away, it was just unbelievable.

“It feels amazing, especially because this win is so huge for us. This game just brings us up another level and puts us back on the right track.”

O’Leary acknowledged that if his team was going to earn a positive result on a day like Wednesday, everyone would have to make a contribution.

“When guys come off the bench, they either give you a lift or the standard drops,” he said. “They definitely gave us a lift today, they were terrific.”

As a coach, O’Leary mentioned his satisfaction with the performances put in not just by the freshmen, but he also recognized the leadership shown by the upperclassmen.

“It’s nice to see anyone score, but I’m really pleased for them,” he said. “They’re both terrific guys, and they deserve it. They’ve brought a freshness and a great attitude to the place.

“If you look at our senior leadership today, I thought Will (Ellis) was the best player on the park, I thought he was terrific,” he added.

Another player that received praise was senior Danny Belza, who O’Leary said gave the team a positive shift and brought a steadiness to the team that was needed.

Following the go-ahead goal, the UMass defense was tasked with fending off the Hartford attack, which O’Leary felt it did to perfection.

“(They were) so excellent,” O’Leary said. “But they have been (there) before. They were against (BU), and when I think you’re looking for your first win, it’s always going to be a little frantic at the end.

“(Hartford) is a fine team, I think they won 13 or 14 games last season and are the favorite to win their conference. Our guys were strong and resolute, and stood up against some very good players today.”