Janet Yellen to speak at UMass on Thursday 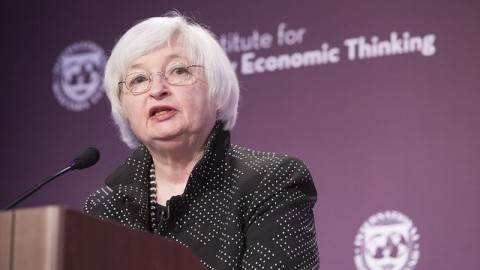 Courtesy of the International Monetary Fund

(Courtesy of the International Monetary Fund)

Janet Yellen, chair of the Federal Reserve, is set to visit the University of Massachusetts Thursday evening to deliver the 19th annual Philip Gamble Memorial Lecture.

The event, which is scheduled for 5 p.m. in the Fine Arts Center Concert Hall, is free and open to the public, though advance tickets are required for admission. The talk is presented by the Department of Economics.

“We’re looking for somebody who typically is well known, somebody who has done great achievements as an economist and somebody we believe will give a talk that will be of broad interest to the University … and Janet Yellen meets all those criteria,” said economics professor and former department chair Gerald Epstein.

Yellen, 69, is the first woman to head the Federal Reserve. Though having written on many macroeconomic issues, she is an expert on unemployment with a concern for social issues like the labor market and inequality.

Alumnus Israel Rogosa and others established the Philip Gamble Memorial Lectureship in memory of Philip Gamble, an economics faculty member from 1935 to 1971 and department chair from 1942 to 1965.

The endowment fund has supported the lecture series, which features a prominent economist each year, since its inception in 1995.

“This lecture has established itself as one of the premier university economics lectures given because of the stellar group of people we’ve been able to attract,” said Epstein.

Choosing whom to invite as a guest speaker ultimately comes down to the department chair, currently Professor Michael Ash. The chair consults with the department, allows faculty to suggest potential candidates and then comes to a final decision with the department’s governing body, or executive committee, according to Epstein.

Yellen and her husband George Akerlof, who presented the Gamble Lecture in 2012, have both taught at the University of California Berkeley, where Ash received his Ph.D. in economics. Akerlof was also Ash’s dissertation adviser when he studied there.

Epstein said there is a “strong connection” between UMass economics, Akerlof and Yellen, whom he referred to as a “brilliant, first-rate economist.”

Yellen took office as chair of the Board of Governors in February 2014 and serves as chairman of the Federal Open Market Committee, the Federal Reserve System’s main monetary policymaking body.

Yellen has taught as an assistant professor at Harvard University, served as an economist with the Board of Governors and been on the London School of Economics and Political Science faculty.

“We’re very honored that she’s coming here and we’re hoping that the whole campus learns from her talk and is really looking forward to her visit,” said Epstein, who also thanked the Rogosa family for their support.

Joseph Stiglitz gave the first Gamble address in 1995. Thomas Piketty, Alan Blinder, Akerlof, Elinor Ostrom and Gretchen Morgenson, among others, have given the lecture in years past.