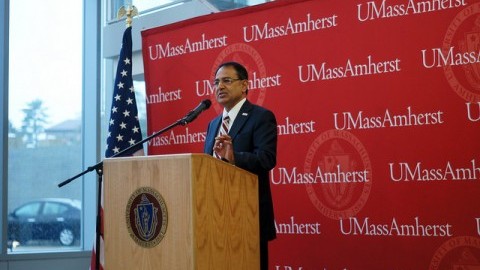 Last semester I had the incredible privilege and pleasure of studying in China with the Alliance for Global Education, funded in part by generous scholarships provided by University of Massachusetts alumni. My host institution, the Shanghai University of Finance and Economics (henceforth SUFE), is highly regarded in China.

This past year, it was reported to have received the highest number of early admission applications in the country. Despite its prestige, SUFE, along with the vast majority of Chinese universities, lags behind American schools like UMass when it comes to student life. Dormitories (for Chinese students, not privileged foreigners) are atrocious and overcrowded.

Dining selections on campus are minimal. I suspect that most classrooms haven’t been refurbished for decades. This isn’t at all surprising given China’s rank on the UN’s Human Development Index (91 as of 2013). But when it comes to one of the most essential tools for education in the modern age, access to the Internet, SUFE’s infrastructure is first-rate.

Not once did I ever find myself struggling for a signal on a campus of 13,000 students in a relatively poor country.

You can imagine my disappointment when I returned to the United States, by far the richest society in world history, to find that the Wi-Fi on our campus had not only not improved, but in fact degenerated further.

I noticed that the OIT webpage reported Sept. 17 that it was “investigating” reports of slow access. If this were a new problem, then one might be able to overlook these past two weeks of horrendous connectivity. But this is not a new problem, and in fact has been an ongoing issue since I stepped foot on this campus in 2012.

After the botched roll-out of eduroam last year and the introduction of a new fee, ostensibly to support internet services, the Wi-Fi on campus is worse than ever before.

The university’s Wi-Fi has long been the butt of jokes among the students, but in truth, this is no laughing matter. Internet access is so essential to education and commerce in the modern age that I don’t even need to discuss it, yet even as I write this email, the Wi-Fi is practically unusable.

To call this unacceptable would be a huge understatement.

Because I don’t know exactly what the problem is, I can’t point the finger at one particular cause. I doubt the blame lies with OIT employees, who in my experience have always exhibited competence and professionalism. Perhaps the problem is that our government allocates a disgracefully low sum to fund public higher education.

But given the plethora of construction projects on campus, one wonders why the University chose to allocate scarce funds to new capital projects without paying much attention to upgrading invisible but crucial infrastructure such as internet access.

As members of the top leadership of this campus, ultimately you are responsible for fixing a problem that impacts the productivity of your students in a meaningful way. Please feel free to forward this email to whomever you feel should view it.