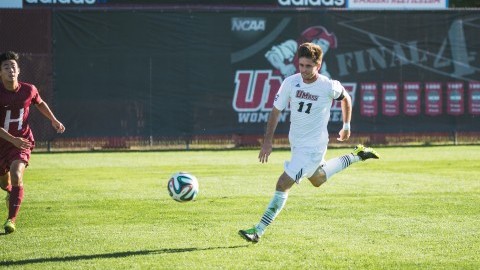 A goal in the 66th minute by Columbia senior Frederick Elliot handed the Massachusetts men’s soccer team its third consecutive defeat to open 2015, as UMass fell to the Lions 1-0 Friday night.

With 24 minutes remaining in the game, Columbia (1-0) defender Bryce Terrill sent a corner kick into the box that was subsequently headed down by sophomore Arthur Bosua. The ball fell to Elliot, who had his back to the goal but was able to back heel it past Minutemen (0-3) goalie Bardia Asefnia to take the 1-0 lead.

Although his team came away without the victory, UMass coach Fran O’Leary said he was proud of the team’s performance, which he believed was an improvement from its first two games.

“I thought it was our best performance to date,” he said. “Columbia is a very difficult place to come and play and I thought our guys gave a terrific effort. I really feel bad for them, they left everything they had out on the field.

“I think if we keep plugging away, the results will start to come our way.”

While they were tested several times on defense, the Minutemen also had several chances to score its first goal of the season. With 21 minutes to go in the opening half, a cross into the box found a wide-open Mark Morris, but his shot was sent wide of the net. Then with less than 12 half minutes left in the contest, UMass received a free kick opportunity right outside the 18, but the shot sailed into the wall set up by the Lions’ defense.

Despite the Minutemen’s lack of offensive production through their first three games, O’Leary said he believes the goals will come and there isn’t much cause for concern.

“I think there would be if we weren’t creating chances, but we have been,” he said. With a little bit of luck or a nick here and there, we’d have a few goals on the board right now.”

UMass seemed to be on the back foot right from the opening kickoff, getting outshot 12-to-6 and receiving only four corner kicks, compared to 14 earned by Columbia. O’Leary acknowledged that it took the Lions a set piece to score and he was pleased with the defensive performance of his team.

“Very good, from our goalkeeper all the way up to our forwards,” O’Leary said. “Everyone worked their tails off and I thought we were unfortunate to come away without a result today.”

The Minutemen will need to regroup quickly following their latest defeat, with a one-day break before a road matchup with Central Connecticut State Sunday at 1 p.m.

“Whether you win or lose, it’s all about moving on, and our guys are already looking forward to Sunday,” O’Leary said.