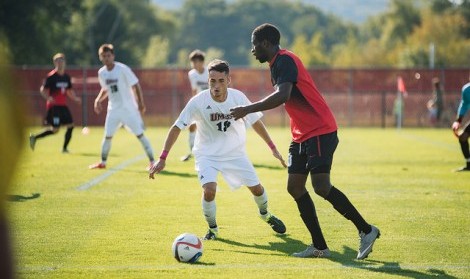 An inability to finish chances doomed the Massachusetts soccer team in a 1-0 loss against New Hampshire Saturday.

In fact, a lack of goal-scoring ability has crushed the Minutemen (1-7) all season long. They’ve been shut out five times, scored more than one goal just once (a 2-1 win against Hartford on Sept. 16) and have tallied just four total goals in eight games this season.

But according to UMass coach Fran O’Leary, these offensive struggles are not due to a lack of chances.

“When you get concerned is when you’re not creating chances,” O’Leary said. “We’re working hard to create them and we need a little bit more concentration and a little better luck and I think the goals will start to come.”

The Minutemen will need those goals to show up this weekend when UMass takes on a hot Vermont team Friday afternoon and a battle-tested Brown team on Sunday.

The Catamounts (3-3-1) enter Friday’s matchup winners of two straight, and O’Leary had high praise for them after Wednesday’s practice.

“Up front, they have two very good strikers. So their strength is really their attacking players,” O’Leary said.

O’Leary also praised Vermont’s defense and coaching and said the Minutemen would not be gifted any chances against the Catamounts. Instead, they’d have to manufacture them.

Defensively, the burden for stopping a Vermont attack that’s scored nine times in the last four games will fall on UMass’ back four. Matt Pease, Brandon Merklin, Matthew Mooney and Dylan Cranmer were all players O’Leary singled out as key players in keeping the Catamounts at bay.

“UVM’s just a big, strong, fast team,” Mooney said. “We have to make sure they stay in front of us at all times and not let them run the channels on us.”

The focus on Sunday will shift to Brown (3-2), as the Bears enter having lost two in a row, although one of them was against No. 7 Clemson. Prior to its losing streak, Brown had notched wins against a strong Providence team, as well as Quinnipiac and Holy Cross.

Although they’re facing two quality opponents, scoring opportunities should present themselves for the Minutemen over the course of the weekend. The Bears have allowed six goals in their last two games, while Vermont has let in 12 goals over its seven games this season.

When the chances come, UMass will need to take advantage of them if it expects to come out of the weekend with a win, and as a result, there has been a constant theme at practices throughout the week: finishing.

The four goals scored by the Minutemen this year have come off the feet of four different players. Ty Goncalves, Lenoir Sery, Kevin Boino and Samuel Asamoah have all found goals for UMass, and along with leading assist man Alex DeSantis, they will be relied on to provide more on the attack.

Despite struggling offensively, O’Leary noted the team has remained a close-knit group in good spirits, and a light atmosphere at the end of practice Wednesday would seem to confirm that.

“I like this team,” O’Leary said. “This is a resilient group of guys. A lot of teams right now would be coming apart at the seams.”

After the pair of weekend matchups, the Minutemen will turn their attention to Atlantic 10 conference play, which begins Saturday, Oct. 3 at Saint Joseph’s. Only games played in-conference will affect UMass’s standing toward the A-10 conference tournament.

Friday’s game against Brown is set to kick off at 4 p.m. while Sunday’s matinee is slated to begin at 4:30 p.m.