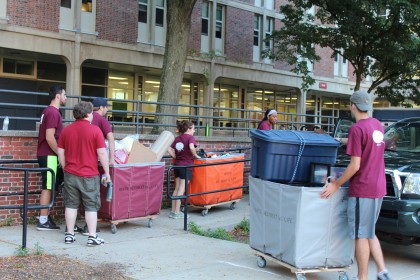 When University of Massachusetts students moved onto campus the first weekend of September, they may have overlooked the volunteers unloading their cars and bringing their belongings upstairs, considering that the process takes only a matter of minutes.

These volunteers – known as Minute Movers – are responsible for moving in all on-campus UMass students and are often the first point of contact that new students have with the University upon arrival. According to Minute Mover Coordinator Greg Barysky, they just had their most successful move-in weekend yet.

“We started doing everything brand new this year … we started from scratch,” Barysky said. “It wasn’t as structured as we had wanted it to be in previous years, and that’s why we changed everything.”

This year’s Minute Movers team, comprised of about 750 movers and 35 team leaders, moved in approximately 7,000 students in three days time. When the program started in 2011, the mover team was made up of just 200 students.

Barysky and his fellow coordinators started planning the move-in operation in February, and continued to work throughout the summer, improving the program and making it even easier for students and their families to get in and get out.

“Our goal in general for each family was about 90 minutes, between moving in and leaving. We were really hitting our marks … what we changed was awesome,” Barysky said.

In Van Meter Hall, which is located in the Central Residential Area, Barysky said volunteers were moving in about 20 students per half hour.

New blueprints, called move-in plans, were created for each residential building to show movers how to best navigate through certain doors and hallways once inside.

Coordinators also ordered more laundry carts, which are used to transport students’ belongings from the street to their room, than ever before. Barysky said there were about 500 carts scattered across campus.

He also cited the new “Living at UMass” mobile application – which keeps families updated with traffic notifications and interactive maps – as a major improvement.

Other changes included an electronic check-in system, numbered chalk parking spots in unloading areas, and industrial ramps in areas like Orchard Hill, where some stairs were not functional.

Barysky also said UMass Residential Life and the Minute Movers program had been “very divergent” in the past, which was something they aimed to fix.

“We really weren’t communicating at all, so this year we wanted (resident assistants) to know that we wanted them to help us out. If we have a question, we’ll bring them to you … and if RA’s have questions about Minute Movers they can come talk to us,” he said.

For the first time, the Minute Mover coordinators held a meeting with RA’s, informing them about the move-in program. Barysky said team leaders also met with the residence directors of each building, thus increasing communication between the two parties.

Barysky, who is a senior psychology major and got involved with Minute Movers during his sophomore year, said the team hopes to continue improving the move-in system in years to come.

“Moving in is a very, very big project … what we did this year worked, and we’re just going to keep building on it,” he said.

Minute Mover volunteers arrived on campus Sept. 3 for a training session regarding lifting procedures and other move-in policies.

Barysky said 50 returning movers moved in about 100 freshmen students to Kennedy Hall in the Southwest Residential Area that evening, before moving in the rest of the class of 2019 the next morning.

Not only do Minute Movers get to move-in to campus early, but they also have their early arrival fee waived and receive a compensated meal plan for the move-in weekend.