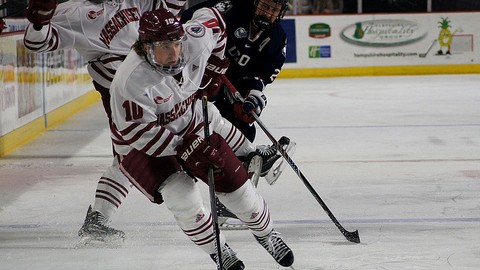 Three Massachusetts hockey players were arrested early Sunday morning on charges of noise violations and disorderly conduct at a party on Old Farm Road in Amherst.

Seniors Shane Walsh and Ben Gallacher, both 23, were charged with violating the town’s noise bylaw, as five police officers responded to a party of about 100 people at 1:15 a.m Sunday morning, according to a report from MassLive.

UMass goaltender Henry Dill, 20, was also apprehended by police for disorderly conduct at a house next to the party, per the report. He was punching a police cruiser for a reason that is unknown, according to the report.

All four men were arraigned Monday at Eastern Hampshire District Court. Then men were found responsible and forced to pay fines for the violations, the clerk’s office confirmed to the Collegian.

UMass Athletics issued a statement on the arrest, saying “We’re aware of the situation and we’re handling internally. We won’t comment further.”

MassLive reported that police found a fake $100 bill in Gallacher’s wallet during the arrest which was tagged for destruction, although no other charges were filed.

In his three years as a Minuteman, Walsh has scored 18 goals and 19 assists. He had a breakout year last season as a junior, tallying 14 goals and eight assists, including the game-winning goal in UMass’ five overtime victory over Notre Dame in the Hockey East conference tournament last March.

Gallacher, a defenseman who was selected by the Florida Panthers in the fourth round of the 2010 NHL Entry Draft, finished second amongst the team’s defensemen in scoring. The Calgary, Alberta native recorded two goals to go along with eight assists.

Jason Kates can be reached at [email protected]u and followed @Jason_Kates.