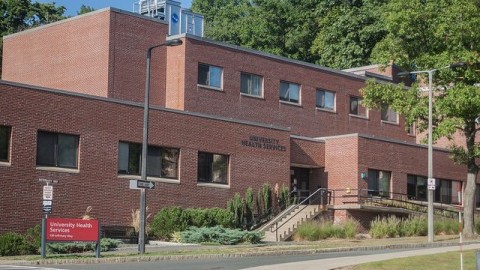 For sick University of Massachusetts students, the prospect of enduring the wait at University Health Services almost justifies the alternative of guzzling cough medicine, curling up in bed, and weathering the illness.

UHS offers same-day appointments, but they’re in high demand. The alternative is to set aside a day to sit in the congested walk-in waiting room among a chorus of coughs and impatient sighs.

However, a new automated text service that was launched in the spring of 2014 and received a face-lift for the upcoming school year has already done its part in reducing wait times at the walk-in clinic, according to UHS Director Dr. George Corey.

Corey said UHS typically sees about a third of its patients through the walk-in services, approximately 100 people per day. Limited staff was responsible for seeing the long lines of students in the waiting room and the arrangement was taxing for both parties. Students would sit for hours while doctors faced an endless stream of patients

“We could see that wait times were far too long so we’ve responded to that,” Corey said. “We transferred more doctors to serve walk-in patients and introduced our text-in services in spring of 2014. We’ve been trying to make the best use of our resources.”

A patient can now text the walk-in clinic and receive a number on the waiting list. When a patient’s number approaches, the software sends a text reminder to make their way to the clinic. The “virtual wait room” allows a student to schedule their day around classes or wait in their own living area, according to Corey.

Within a few weeks of the program’s launch, nearly 40 percent of patients used the service. At the peak winter season UHS data showed that people who text ahead waited 60 percent less than those who did not, according to Corey.

“The waiting room went from being crowded, pandemonium, to much more calm. It doesn’t make much sense in this day and age to hold your place in line by sitting in a chair,” Corey said.

Corey hopes the process will run even smoother with the installment of upgrades to the program’s software. Students can now take a number at their convenience instead of being automatically assigned one and can cancel through the same service. They’ll also be notified of how many patients are ahead of them in line.

The text-in service began when a startup software company Trext, run by graduates from colleges in the Pioneer Valley, approached Corey. They pitched their services and Corey requested a program to reduce wait times in their clinic. The team produced the code in a weekend, and the relationship has continued ever since.

Corey would not reveal what UHS paid for the program but insisted it was a cost effective-decision.

“If time is important, and it is, say you have to cut the waiting times in half. Well you would have to hire more doctors and that’s expensive. With this program our doctors are able to see more patients because the whole process is seamless,” Corey said.

The text-in service is not the only technological approach Corey is taking to improve efficiency.

Beginning this school year, students can now make appointments online instead of calling a receptionist, and the clinic will introduce a new initiative to submit immunization records. Students will be able to take pictures of their medical records with a phone and then upload the image to an online portal that UHS can access, eliminating the need to turn in a physical copy.

For Corey, these programs are a no-brainer and he actively looks for new ways technology can be utilized to improve the UHS’s services.

“We’re trying to use whatever resources at our disposal to modernize and be the most efficient as humanly possible,” Corey said.