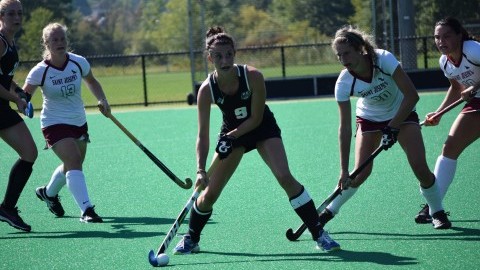 The junior’s four shots on goal and two assists led the Minutewomen (5-2, 1-0 Atlantic 10) to their third consecutive victory and first in Atlantic 10 play.

It’s becoming a habit for UMass to set the tone early in games and Friday’s match was no different. In the 14th minute, Delario found sophomore Sarah Hawkshaw at the top of the circle. Hawkshaw did not miss her chance and rifled a shot under the crossbar to put the Minutewomen in front 1-0.

“We did a nice job in the first half, we executed well,” UMass coach Carla Tagliente said. “We executed our penalty corners, I would’ve liked to have more but I think we did a good job there.”

UMass only mustered only one penalty corner Friday but it did not affect the Minutewomen’s game, however, as the Minutewomen kept momentum and high energy throughout the first half outshooting the Hawks 11-2.

Anne Dijkstra capitalized on the one penalty corner the Minutewomen were awarded. After Delario passed it in, Kim Sistermans found Dijkstra in front of the net for a deflection. Dijkstra’s first goal of the season gave UMass a 2-0 lead going into halftime.

“We just come out with a lot of energy and we’ve scored within the first 10 minutes of every game (during the win streak),” Nicole Miller said. “We prove that we are the team that wants to win here.”

“It was hot and I thought we expended everything we had in half one,” Tagliente said. “We didn’t have much left in half two, we kind of fell back a little bit and were playing very defensive.”

The Hawks couldn’t take advantage of the Minutewomen’s mistakes except for a goal in the 44th minute. In a crowd in front of the UMass net, freshman Taylor Leonhardt knocked one past goalkeeper Sam Carlino to keep the Hawks within one.

But that was all Carlino allowed as the Minutewomen’s defense continued its success they’ve seen during the current three-game win streak. Saint Joseph’s was held to four shots on goal Friday.

“We are very good on our corners and I know when I’m up here the defenders will get it out,” Miller said, “No doubt about it.”

“Its something we keep working with and tweaking,” Tagliente added about the defense. “It is not where we want it to be right now but we have definitely improved significantly.”

Delario clinched UMass victory with an insurance goal in the 67th minute as the ball was put into the goal area and pushed in to give the Minutewomen its lasting 3-1 lead.

The Minutewomen now set their sights on Richmond, who knocked UMass out of the tournament last season in the finals and won both matchups last year.

“They are ready to play Richmond,” Tagliente said. “It does not take much motivation from me to get them up for this game.”