UMass football gears up for trip to South Bend to face No. 6 Notre Dame 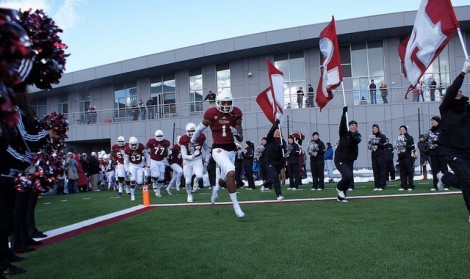 In preparation for its game against Temple last week, Massachusetts football coach Mark Whipple said the Owls were the best team UMass has seen in his two-year stint since returning to the helm of UMass.

Now in their third week of the regular season, following a 25-23 loss to Temple last Saturday, the road doesn’t get any easier for the Minutemen.

UMass (0-2) will travel to South Bend, Indiana this Saturday to face No. 6 Notre Dame, the Minutemen’s highest-ranked opponent since its move to the Football Bowl Subdivision in 2012. While UMass players said they’ve approached the program’s first-ever matchup with the Fighting Irish no differently than in past weeks, quarterback Blake Frohnapfel acknowledged the added significance of the game.

“For UMass coming up from FCS to FBS the past couple years, playing Notre Dame is playing the top of the top,” Frohnapfel said. “It’s kind of a measuring stick for yourselves. If we can compete with these teams, it gives you confidence in what you’re doing and to the program as well.”

Frohnapfel said last week’s matchup with Temple – who came into Gillette Stadium at No. 26 in the nation following wins over Penn State and Cincinnati – instilled confidence in the Minutemen despite its inability to seal a victory.

UMass took its first lead of the game against the Owls Saturday with one minute, 20 seconds remaining in the fourth quarter courtesy of a 16-yard passing touchdown to running back Jamal Wilson.

But on the ensuing extra point attempt, Blake Lucas’ kick was blocked at the line and returned to the opposite end zone by Temple for two points. The Owls then regained the lead permanently on a field goal by Austin Jones with 12 seconds left.

Following the game, Frohnapfel said it was “unbelievable” how the final plays of Saturday’s loss unfolded. However, at Tuesday’s practice he said the tightly-fought battle provided plenty of positive takeaways coming off the Minutemen’s disappointing 48-14 loss to Colorado in their season-opener.

UMass senior wide receiver Tajae Sharpe added that it didn’t take long for the Minutemen to regain their focus in the pivotal week before their matchup with the Fighting Irish.

“The next day after we finished watching the film, we were past it all,” Sharpe said. “You can’t get too low on any type of loss and can’t get too high after any victory. We just moved past it.”

Sharpe added: “Playing against Notre Dame, they have a lot of history at that school. They have a great team, a great defense and it’s going to be exciting. You always want to play against the best to see how you rank up.”

Senior running back C.J. Prosise complemented Kizer with 198 rushing yards and three touchdowns against the Yellow Jackets. Prosise, the Fighting Irish’s special teams player of the year in 2014, has earned the brunt of the carries with starting running back Tarean Folston suffering a season-ending ACL tear against Texas on Sept. 5.

Zaire and Folston headline a group of six Fighting Irish that have already been sidelined for the remainder of 2015 due to injury, including four starters. However, with depth at every position, Whipple said the Notre Dame’s health situation won’t be a major factor Saturday.

“It doesn’t look like they’re too injured to me,” Whipple said. “They recruit pretty good, they have a lot of guys. Their special teams guy (Prosise) is averaging 150 (yards)… They’re really talented and that’s a credit to their staff with what they have for players.”

UMass faces the Fighting Irish at 3:30 p.m. Saturday at Notre Dame Stadium. The game will be nationally televised on NBC.