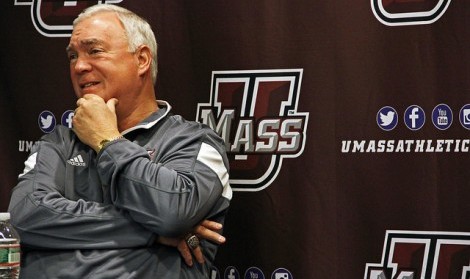 When the Massachusetts football team saw Temple on its schedule of non-conference games, it certainty didn’t expect this week to be one of its biggest tests of the year.

That was before the Owls became one of the biggest surprises of the 2015 season.

In its opener against cross-state rival Penn State, Temple shocked the college football world with a 27-10 win over the Nittany Lions. Its defense held one of the country’s top NFL quarterback prospects in Christian Hackenberg to 103 passing yards and an interception on 11-for-25 throwing.

The Owls then turned around and defeated Cincinnati 34-26 in their American Athletic Conference opener the following week.

Minutemen head coach Mark Whipple is not taking Temple lightly. He had nothing but praise for the one of the nation’s biggest surprise stories so far, calling them the toughest opponent he’s coached against in his second year of his second tour at UMass.

“They’re the best team we’ve played since I’ve been here,” Whipple said. “They don’t have a weakness and and they have great leadership. Their guys play hard and they should be ranked higher than they are.”

He added: “We played Penn State last year and we didn’t set the world on fire. They dominated those guys.”

The Nittany Lions were flustered all day as the Owls made it a point of emphasis to get pressure early and often on Hackenberg. Temple finished the day with 10 sacks and followed that performance by forcing Bearcats quarterback Gunner Kiel into throwing four interceptions.

“It’s definitely a pretty big week for the offensive line,” left tackle Tyrell Smith said. “We had a little bit more mistakes than we wanted last week. We just have to brush up on the mental mistakes that we made last week and just do what the coaches are telling us to do.”

Minutemen quarterback Blake Frohnapfel added: “Temple puts on a lot of pressure. They sacked Christian Hackenberg 10 times in one game, that’s pretty impressive. For those guys, that’s a group that’s been together for a long time and know what they’re doing so it’s just a matter of (us) getting the job done or not.”

If the Owl’s pass rush wasn’t enough to give UMass fits, the Minutemen’s defense will have its hands full trying to stop running back Jahad Thomas, who’s been one of the top backs in the nation, ranking third with 328 rushing yards through two games. Thomas has scored three touchdowns this season.

Defensive coordinator Tom Masella said Thomas was one of the best running backs he’s seen since he’s coached the Minutemen, putting Thomas in the same sentence as Toledo’s Kareem Hunt.

“He’s a great back. This guy can get into space and make anyone miss,” Masella said. “He made a lot of guys look silly in the Penn State game and in the Cincinnati game. We have to be gap sound and we need to get more than one guy to the ball.”

Both Whipple and Masella said that physicality was the biggest disappointment from last Saturday’s 48-14 season-opening loss against Colorado and that playing more physical and gap control were the two big focal points going into Temple.

In addition to stopping Thomas, UMass will have its hands full with dual-threat quarterback P.J. Walker, who has two passing scores and one rushing touchdown this season. The Minutemen will likely force Walker to stay in the pocket and beat them with his arm rather than his legs.

If they lose contain of either Thomas or Walker, expect it to be another long day at Gillette Stadium.

“We thought we were going to a party and they thought they were going to a street fight,” Masella said about how the team looked against the Buffs. “I hope our kids rebound and I know they will. They’re going to come out and show they are a lot better than they were last week.”