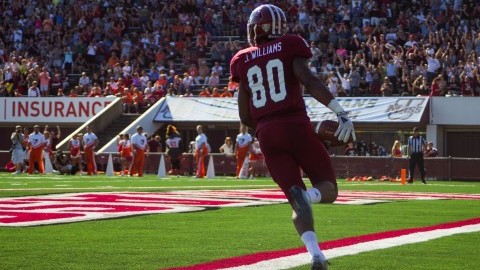 WWLP.com reported Monday night that Massachusetts football senior wide receiver Jalen Williams was arrested this past weekend and has been suspended from the team.

According to WWLP, Williams was charged with breaking and entering of a vehicle and larceny under $250 early Sunday morning around 1:30 a.m. Documents showed Williams was one of two individuals, along with Ruben Encarnacion, to be pulled over on North Pleasant Street for a reported break-in.

The document said the two suspects broke into the vehicle and left once its alarm sounded. Police then found the victim’s social security card and debit card next to the car, and later stopped the vehicle that Williams and Encarnacion were in, finding another debit card that belonged to an additional person. Neither suspect could explain why it was in the car.

Williams told WWLP that he did not steal anything and was pulled over because he “fit the description of a suspect Amherst Police were looking for.”

According to WWLP, Williams said he argued with the police officer while in the back of the police car, leading to the officer abruptly braking as Williams’ head slammed against the car window.

Williams did not play in the Minutemen’s first two games of the season, as he’s been battling a “bad” quad injury, according to UMass coach Mark Whipple. He is coming off a 2014 season in which he recorded 20 receptions for 307 yards and four touchdowns.

Larry Franklin no longer a member of UMass football team

UMass’ defense has lost depth at the linebacker and safety position with the departure of Larry Franklin, who left the team for personal reasons, according to a report from Matt Vautour of the Daily Hampshire Gazette.

Franklin, who transferred from Vanderbilt before the start of 2015, played in the Minutemen’s season-opener against Colorado where he recorded two tackles in UMass’ 48-14 loss.

Franklin played two seasons for the Commodores before leaving the team in 2014 with the departure of head coach James Franklin to Penn State. The 6-foot, 210-pound Vero Beach, Florida native stayed at Vanderbilt and received his degree before arriving in Amherst.